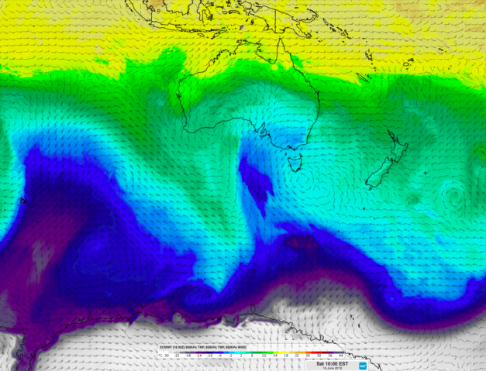 A pulse of wintry weather has sent shivers across southeastern Australia during the last few days. So, just how cold did it get and how does this event compare to past years in Australia?

Every winter has cold weather. Between June and August, outbreaks of snow, rain and brisk winds are to be expected as cold fronts sweep over Australia’s southern states.

The system that affected southeastern Australia on the weekend was notable for its feed of cold air from unusually high latitudes. A high pressure ridge extending from the Great Australian Bight all the way down to the fringes of Antarctica created an avenue for polar air to traverse the Southern Ocean and reach Australia.

Some places experienced one of their coldest days of the last decade on the weekend.

In central NSW, Bathurst’s top of 5.4 degrees on Sunday was its equal second lowest maximum temperature of the last 10 years.

South Australia’s Port Augusta only reached 12.3 degrees on Sunday, which was its coldest day in six years and the coldest for June since the site opened in 2001. Oodnadatta Airport, which holds the record for Australia’s highest temperature, dropped below zero degrees on Monday morning for the first time in four years.

In Queensland, Coolangatta registered its lowest temperature in 10 years on Monday morning, dipping to 0.6 degrees shortly before 5am. This was also the site’s lowest June temperature in at least 27 years. Oakey’s -4.9C was also a four-year low.

One of the most visually striking features of the cold weather during the last few days was snow. Elevated areas of Tasmania, Victoria, NSW and the ACT received a dusting, including the Brindabellas, Oberon Plateau, Blue Mountains, Barrington Tops and Cradle Mountain. There was even some snow as far north as Guyra on the Northern Tablelands in NSW by Monday morning.

Australia’s alpine region experienced one of its best early-season snowfalls in decades during the last week.

A weather station at Perisher Valley, which sits just over 1,700 metres above sea level, registered 91mm of precipitation during the last five days. As the temperature was below freezing during most of this time, this translates to around 80cm of snow accumulation.

According to historical records at Mount Hotham, the 80cm that was measured on the ground there this morning is their best depth this early in the season for 18 years.

If this week’s snow depth reading by Snowy Hydro is greater than 50cm at Spencers Creek, which is located between Perisher and Thredbo, it would be the highest measured this early in the season since 2009.

While this wasn’t a record-breaking cold snap, it did cause colder weather than recent years in some areas and brought remarkably heavy early-season snow to the alps.