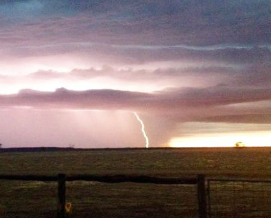 The best June rain in more than 10 years has fallen on parched ground around Longreach and Barcaldine in central-west Queensland.

Almost 60 millimetres was measured in the Longreach Airport gauge at 9:00am, which was the most rain for a single day in June since 2005.

This was the third rain event in as many weeks, bringing the monthly total up to 114 millimetres, smashing the previous record by 17 millimetres.

“Because we’ve had three separate events by roughly a week each, it means the grass has a chance to grow, and we’ve only been having mild nights, which means we’re not getting frost come and kill the new growth, so it’s actually really good news for the graziers,” she said.

Trip from Longreach to Winton yesterday was a wet one but no complaints. #emu16 @LGAQ pic.twitter.com/0ID4toqX91

Rain not enough to break the drought

Gayle East from Breedon Station near Longreach said her property received a massive 93mm, which she said had been her families first decent fall in years.

“The house dam is full after being empty for such a long time, I can’t quite believe it yet,” she said.

“It’s been a long, long, long wait  north, south, east and west of us have had some rain, but now it’s finally fallen on us.”

But Ms East said while the rain was welcome, it was not enough to break the drought.

“This particularly county here has never been so dry for so long so we’ll just have to wait and see what the response is,” she said.

“I think the Mitchell grass will be long dead, but hopefully it will bring some herbage.”

At Neenah Park Station, north-west of Longreach, Anne Webber was thrilled to measure 83.5mm in the rain gauge this morning.

“Words just can’t describe it and you have a big smile on your face,” she said.

“I couldn’t sleep, it was coming in waves, the wind, the thunder, the lightning, and the rain.

Like many in drought-declared western Queensland, Neenah Park had been destocked for the past two years.

“After so long without the rain, you begin to wonder whether a lot of the tussocks are dead or dormant,” Ms Webber, who moved to the property in late 2012, said.

“It’s just a nice thought that when we can get out and drive around, just to see what has happened, it’ll just be awesome.”

In just the past fortnight, Neenah Park has recorded a total of 107mm.

“That’s more than we had for the whole of last year,” Ms Webber said.

“We’ve just been on the dry side of dry.

“This is just wonderful, and the river’s running. it was dry yesterday, we rode the bikes across it yesterday.”