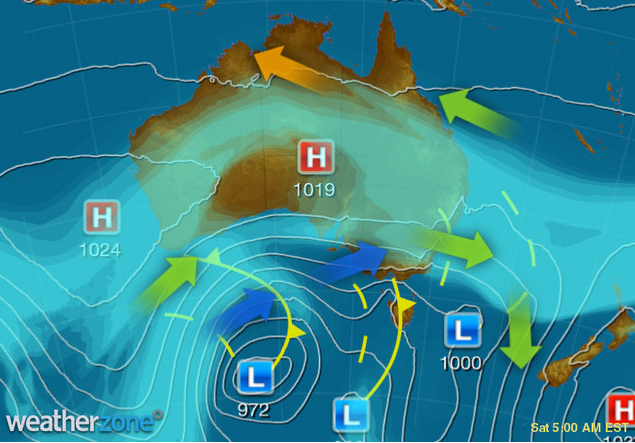 It’s going to be another windy weekend in southern Australia as a series of cold fronts and low pressure systems sweep across multiple states.

Parts of South Australia, southern NSW, Victoria and Tasmania will be impacted by rounds of blustery winds and showers, with possible thunderstorms and small hail this weekend.

This follows on from last weekend, which saw the Victorian State Emergency Service respond to more than 1000 incidents as damaging winds lashed the state on Saturday.

The first front in this series will cross SA today and weaken as it moves over the remaining southeastern states tonight and on Saturday morning.

The strongest winds will be ahead of the front in exposed coastal and elevated areas of South Australia’s southern districts today, before tending westerly and easing behind the change this afternoon and tonight. Wind gusts had already reached 83km/h at Neptune Island and 82km/h at Cape Willoughby prior to 11am.

The next front and a trailing low pressure system will produce stronger winds from Saturday afternoon and on Sunday. These systems will bring multiple bursts of increased wind and may produce damaging winds in some areas, most likely in South Australia.

The series of fronts is likely to cause strong to gale force winds in the alps during the weekend, with blizzard conditions likely on Sunday.

The latest severe weather warnings will be available throughout the weekend at http://www.weatherzone.com.au/warnings.jsp