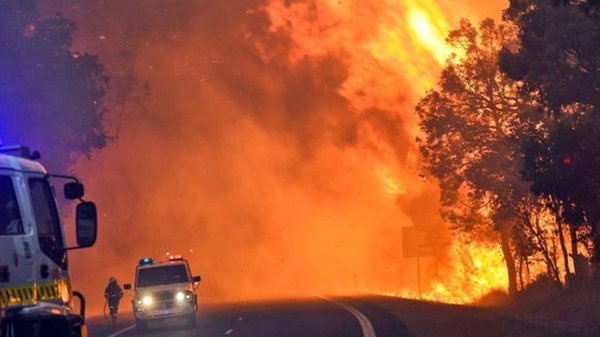 The fire that continues to burn in Yarloop, in Western Australia, is now so large it has formed its own weather system.

Thunderstorms in the area brought welcome rain, but the Bureau of Meteorology (BoM) said it would not be enough to dampen the blaze.

BoM also warned that with the rain comes unpredictable winds and dangerous lightning, which could further hamper firefighters’ efforts to control the blaze.

It has already burnt through more than 58,000 hectares of land including almost 100 homes.

“When we’re talking about the race against time, it’s the sheer size of this thing that’s a problem, so even with just small gusty winds Ã¢?Â¦ they can flare up again so this is going to take some time to fight,” BoM’s Neil Bennett said.

Mr Bennett explained how the heat of bushfires could sometimes create rain clouds that led to difficult conditions for firefighters.

“This could well be the end of #Yarloop” – Bushfires continue to blaze, destroying 95 homes https://t.co/c2hkkbXrKO pic.twitter.com/nj1ZuvBsKS

“And the reason for that is that the fire is throwing out lots and lots of particles of soot, carbon, and those tiny little particles form what we call condensation nuclei that the water vapour can condense onto.”

It is a rare weather event and creates a new set of challenges for firefighters with the risk of lighting and unexpected wind changes.

“The issue that you’ve got with lightning is that the strike can go outside an existing fire zone and start a new ignition point, so that’s something that they don’t want,” Mr Bennett said.

“The other problem that you face with a cloud such as that is that it develops ‘up and down drafts’ within the cloud and those up and down drafts Ã¢?Â¦ create gusty and variable direction winds.

“So depending on where you are in relation to the cloud, that’s where the wind’s going to come from, and that makes fighting the fire very difficult and treacherous.”

Mr Bennett said there was no heavy rain forecast until Sunday, but more humid conditions in the meantime could slow the spread of the fire.

“Whilst the vegetation is very, very dry the fire spreads really quickly,” he said.

“If the vegetation becomes moist due to an increase in humidity or rain, then the spread of the fire can be slowed down.

“The thunderstorms today are producing little in the way of precipitation whereas tomorrow there’s the possibility the precipitation could be heavier.

“So there’s a bit of a trade-off there, because if you get a really heavy thunderstorm over you, yes there is a lightning risk associated with that, yes there are the gusty winds but you have the bonus of heavy rainfall.”

“We’re expecting more moist westerly air over the region and it’s at that point we think they’ll hopefully be able to control it.”