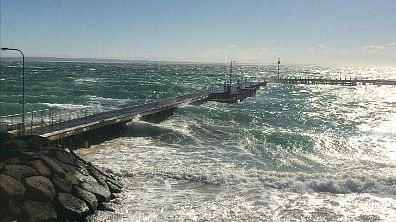 Melburnians have woken to sub-zero temperatures during the city’s coldest morning in 16 years.

The mercury dropped to a chilly 1.4 degrees just after 7.30am (AEST) on Sunday, the lowest temperature since 1998.

Light winds and clear skies contributed to the frosty start, according to the Weather Bureau’s Richard Carlyon.

“We’ve seen lower temperatures in the suburbs, so even though the city hasn’t dropped below zero we’ve seen several areas with temperatures below zero,” Mr Carlyon said.

According to the bureau, the mercury fell to -2 degrees Celsius in Essendon and -1C in Viewbank, in the city’s north.

But the title of coldest place in the Melbourne-Geelong area went to Avalon, with -3C degrees.

Mr Carlyon said it was Ballarat’s coldest start since 2002, when the mercury dipped to -5C, while Bendigo reached -4C.

“It’s been reasonably extreme around the state, but there’s been no long term records broken as such.”

In the east, Omeo got down to -7.6C and Mt Bulla was the coldest of the ski resorts, reaching -8.3C.

“[There will be] fairly similar conditions with light winds and clear skies, so we’ll see the temperature in the city down to around 2C, and some frost about the suburbs,” he said.

“But it looks though after that, we’ll see a bit more wind through the week, and certainly along the coast the temperatures won’t be as low.

“But further in we’re going to have a stretch of frosty mornings through most of the week.”