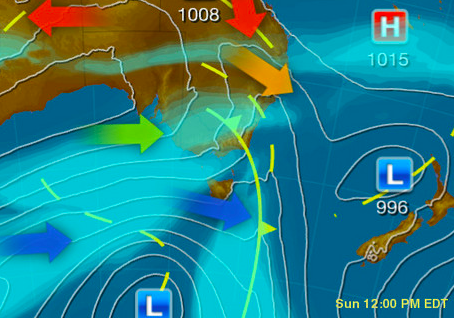 With a hot and dry day over much of New South Wales and Queensland, the thunderstorms and strong winds that are still crossing parts of Victoria and bringing cooler conditions in their wake stand in marked contrast.

A deep inland trough and cold front began to cross the state on Saturday, and have now reached the eastern parts of the state, where strong winds are persisting. Early morning wind gusts over the peaks reached 90-120km/h at Mount Hotham, Falls Creek and Mount Buller.

On Saturday evening, wind gusts of 100-110km/h were recorded at Mount William and Mount Gellibrand, while gusts of 90-100km/h were picked up at Nhill and Horsham.

Overnight showers and thunderstorms brought widespread falls of 10-20mm to southern and central Victoria, including just over 10mm over Melbourne and 20mm over Ferny Creek. Further north in the Mallee, falls of 4.6mm were recorded at Charlton.

Lingering strong coastal winds and much cooler conditions are expected for the next few days in the wake of the system, with daytime temperatures expected to return to the high twenties to low thirties by the middle of the week.