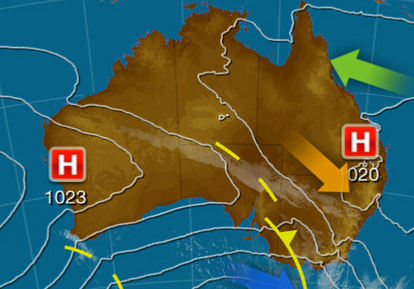 The past few days has seen the warmest July days in more than 50 years in parts of Western Australia, Saturday was South Australia and Victoria’s turn and on Sunday the focus will be on New South Wales and Queensland.

On Friday the unseasonable warmth was mainly in the WA Pilbara and Eucla and in SA’s far west.

Saturday has been the warmest July day in more than 50 years of records at Murray Bridge, reaching 26.9 degrees, 12 above average. It was the warmest for July in more than 40 years for Elizabeth, Loxton and across the border at Mildura, Walpeup and Sale, all comfortably reaching the low-to-mid twenties.

For some, it hasn’t been the most pleasant experience.

The dry, gusty winds drawing this warmth to the south of the country have also been blowing dust and leading to the highest fire danger in several months.

The dry, gusty winds drawing this warmth to the south of the country has also been blowing dust and leading to the highest fire danger in several months.

It is rare to have fire danger go beyond the ‘severe’ category at this time of year, as it has done in the SA Murraylands, Mid North and North East Pastoral. In fact we are seeing the most intense fire weather for July in decades, particularly in areas which have not had much rain this season, including northern and western SA. If it wasn’t for some recent rain and cool weather, fire danger ratings would have soared into ‘catastrophic’ territory.

On Sunday, the warm, dry and gusty winds will travel across NSW and Queensland ahead of a cooler change, rainy for some, which has been dropping temperatures by five-to-10 degrees.