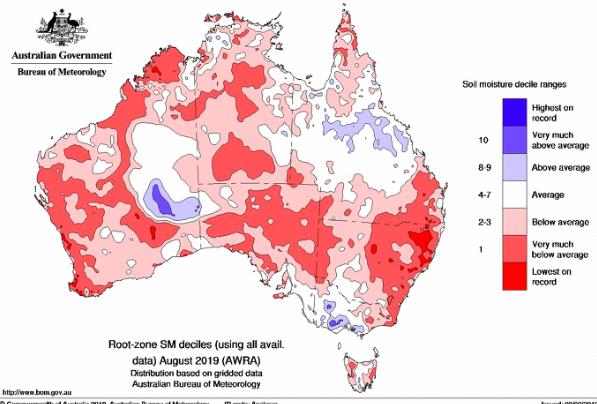 Parts of the Murray Darling Basin have amassed multi-year rainfall deficiencies that have no precedent during the last 120 years, with more dry weather on the way.

A prolonged spell of drier-than-usual weather has seen some areas of eastern Australia fall more than one metre behind their usual rainfall totals during the last three years.

For some places, this dry spell has been their worst on record.

Image: Rainfall anomilies in and around the Murray Darling Basin during the three years ending in August 2019. Source: Bureau of Meteorology

According to the Bureau of Meteorology’s latest drought statement, the 32-month period from January 2017 to August 2019 was the driest such period on record for the Murray Darling Basin and NSW. During this time, rainfall was 40 percent below the long-term average for the northern Murray-Darling Basin and 34 percent below average in the southern basin.

Another region that’s suffered through this lengthy drought was eastern Victoria, where parts of the Gippsland region also just had their driest 32-month period in more than a century of records.

Unsurprisingly, sparse rainfall since the beginning of 2017 has resulted in record low root zone soil moisture in parts of the Murray Darling Basin. This refers to the amount of moisture available for plants in the top 100cm of the soil profile.

The average root zone soil moisture during the 32 months from the start of 2017 to winter in 2019 was the lowest on record for a number of catchments in the northern and eastern Murray Darling Basin. These included:

While reduced vegetation growth is one of the most obvious consequences of below-average soil moisture, the dry earth has also taken a toll on water storage levels across the Murray Darling Basin.

Dry soil absorbs more water, which allows less surface water to runoff into rivers and dams when it does rain. The combination of persistently low rainfall and low runoff has left water storages in the northern Murray Darling Basin extremely low or close to empty. According to the Bureau of Meteorology, major storages in the northern basin at the end of winter were below levels seen at the end of the millenium drought.

While storages are fuller in the southern Murray Darling Basin, water levels are much lower than they should be at the start of spring.

Winter is usually the time of year when increased frontal-borne rainfall fills dams in southern Australia. However, large swathes of the southern Murray Darling Basin just missed out on this winter rain for the third year in a row.

According to the Bureau, rainfall between April and September was more than 50 percent below average for around half of the river catchments in NSW during 2017 and 2018. This trend has continued in most areas between April and August in 2019 as well.

Unfortunately, abnormally dry and warm weather is expected to continue across most of Australia this spring, putting more pressure on dwindling water resources in the Murray Darling Basin.