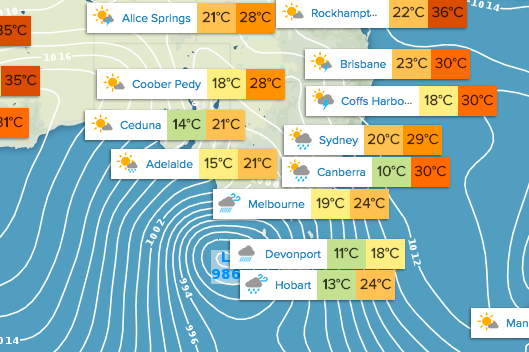 Parts of Victoria, Tasmania and South Australia could be lashed by storms and damaging winds on Thursday as a cold front sweeps across Australia’s southeast.

The cold front will cross South Australia tonight, leaving blustery southwesterly winds in its wake on Thursday. These winds will be strongest in the morning and could cause wind gusts close to 90 km/h alone exposed coastal and mountain areas in the south. Winds will ease throughout the day.

In Victoria, northerly winds will strengthen early before shifting westerly through the day. Wind gusts may reach 90-100km/h ahead of, near and behind the front, which is expected to enter the state’s west in the morning and reach the east during the afternoon.

Areas most likely to experience damaging winds in Victoria include exposed coastal locations in the South West and elevated regions of western and central Victoria. Melbourne will have a blustery day from the get go and could see damaging winds develop, most likely about the Bay.

Tasmania will experience the strongest winds from this system, thanks to a low passing close to the state’s southwest corner. Wind gusts are likely to exceed 100km/h in exposed parts of the north, west and south. Hobart will be gusty too, although the city should get enough protection from the inland ranges to escape damaging winds.

Showers and storms will accompany the front as it crosses all three state on Thursday morning, before contracting to eastern Victoria and western Tasmania during the afternoon. Widespread totals of 5-15mm are likely, with isolated heavier falls exceeding 30mm in northern Tasmania.

Cold air behind the front will also cause temperatures to drop by 5-10 degrees in 24 hours across the nation’s southeast.

Wind and rain will ease on Friday as the low and front move further north and east away from the region.