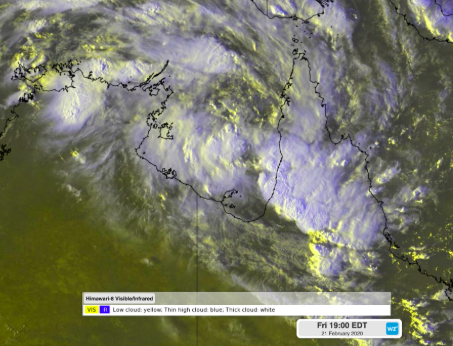 A tropical cyclone is likely to form over the Gulf of Carpentaria this weekend before gaining strength and approaching the coast.

A tropical low that started taking shape over the Gulf on Friday will consolidate during the next 24 hours. The system is expected to become a tropical cyclone on Saturday night or Sunday morning somewhere over the central Gulf of Carpentaria.

Once it reaches cyclone strength, the system will be named Tropical Cyclone Esther.

Image: Cloud building around a developing tropical low pressure system over the Gulf of Carpentaria on Friday evening.

Cyclone Esther should move towards the south or southwest on Sunday and Monday, likely gaining more strength as it approaches the southern Gulf of Carpentaria coast. Esther could make landfall as a category two system early next week, most likely somewhere over the NT’s Carpentaria or Queensland’s Gulf Country Districts.

At 8pm AEST on Friday, a tropical cyclone watch was in place between Karumba and Nhulunbuy, including Mornington Island, Borroloola and Groote Eylandt.

Tropical cyclones over the Gulf of Carpentaria can be unpredictable, so be sure to keep up to date with the latest advisories during the weekend if you live in the NT or northern Queensland.