Australia: The long road to drought 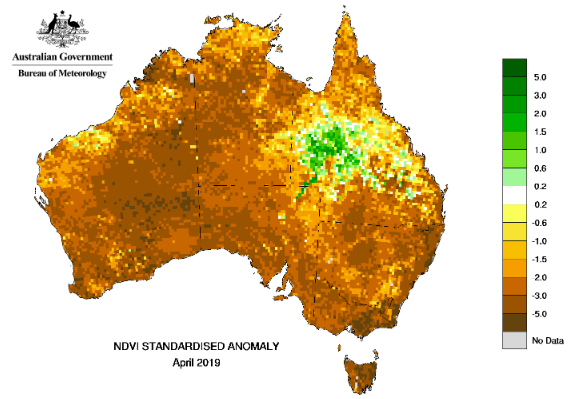 A prolonged period of dry and warm weather is taking a toll on Australia’s water balance, with large swaths of agricultural land in drought and urban dam levels dropping around the country.

Drought is a complex phenomenon. Long periods of significantly below-average rain are referred to as meteorological droughts. This lack of rain often causes water supplies to drop (hydrological drought) and adversely affects crops and livestock (agricultural drought). The combined effect these categories have on various commodities is called the socioeconomic drought.

Underpinning these four drought categories is a distinct lack of rain.

During the 12 months ending in April 2019 rainfall over large areas of northern, eastern and southeastern Australia was at least 200mm down on the usual amount.

Image: Rainfall anomalies during the 12 months ending in April 2019.

Some areas of eastern NSW and Victoria missed out on more than 600mm of their typical rainfall during the past 24 months.

Image: Rainfall anomalies during the 24 months ending in April 2019.

This lack of rain has led to widespread Severe Rainfall Deficiencies during the past two years across a large region of southeastern Australia. ‘Severe’ refers to rainfall totals in the lowest five percent of historical records.

Image: Rainfall deficiencies during the 24 months ending in April 2019.

Some areas in and around the Murray Darling Basin registered their lowest rainfall totals on record during the last 12 and 24 month periods. Records date back to 1900.

In addition to a lack of rain, it’s also been warm in recent months. Persistently high temperatures exacerbate drought by enhancing evaporation and boosting dryness in soil and vegetation.

Australia as a whole just had it’s hottest January to April period on record. This followed on from the nation’s hottest summer on record and the third warmest calendar year on record in 2018.

Despite prolific wet-season rain causing a burst of fresh plant life in western Queensland recently, the rest of the country isn’t faring so well. The Normalised Difference Vegetation Index revealed that there was a lower-than-average proportion of fresh green vegetation across most of Australia during April.

But while the signs of drought are easy to perceive in the outback, the effects are harder to notice in Australia’s big cities. However, they are certainly there.

Every capital except Perth currently has lower water storage than the same time last year. Storages in Sydney, Brisbane, Canberra and Darwin have all dropped by more than 10 per cent during the last 12 months.

Sydney witnessed a fairly steady drop in water storage levels during the last two years and has been receiving water from its desalination plant since March. The Greater Sydney water storage volume is currently sitting at around 54 percent of its capacity, which is the lowest level since the beginning of 2010.

The only parts of Australia that have received significantly above-average rain during the last 12 months were northern and western Queensland and small areas of northern WA.

Looking ahead, the run of warmer and drier-than-usual weather could continue into winter for much of the country.

Image: Chance of exceeding the median maximum temperature during winter 2019.

The Bureau of Meteorology predict that a slowly decaying El Nino-like pattern in the Pacific Ocean and a developing positive Indian Ocean Dipole (IOD) could affect Australia’s weather during the coming months. El Nino and positive IODs both increase the likelihood of below average rain and above average temperatures in Australia during winter and spring.

Image: Chance of exceeding the median rainfall during winter 2019.

It’s worth noting that while signs may be pointing towards more relatively warm and dry weather in winter, this may not be the case everywhere. Heavy rain events can still happen in otherwise dry months.

Unfortunately, it will take multiple months of above-average rain to break the drought in some parts of Australia.