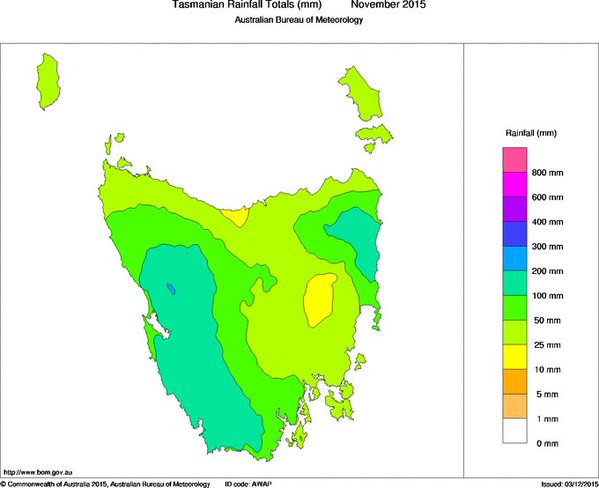 Pressure is mounting on the Tasmanian Government to officially declare a drought in the state.

The Government in November announced a $2.2 million package to help farmers deal with the dry conditions but has been reluctant to use the term “drought”.

Tasmanian Farmers and Graziers Association president Wayne Johnston believed it was a discussion that needed to be had.

“It’s been a prolonged period of dryness,” he said.

“It looks like we’re not going to get any rain in the next week or so that’s anything of significance.

Tasmania has had 100-200 mm of rainfall in November and is apparently drought stricken. One of these is badly wrong! pic.twitter.com/2zzbuokwrP

The Bureau of Meteorology’s drought report for May to December 2015 indicated nearly half of Tasmania was experiencing either “serious” or “severe” rainfall deficiencies.

The TFGA will this week meet with Primary Industries Minister Jeremy Rockliff to discuss the situation.

“I don’t know what the protocols are for declaration of a drought period,” Mr Johnston said.

“This week and into next week, we’ll hopefully sit down with the Minister and have a bit of a discussion about that.

“Whether it be… a freight subsidy coming into the state for grain and pellets, cattle pellets, sheep pellets, that’d be one form.

“We just need to sit down and have a plan for this going forward.”

‘Not yet at the point of drought’

The Primary Industries Minister Jeremy Rockliff was confident the state was not in drought.

“While conditions are very dry as a result of below average rainfall, we are not yet at the point of drought,” he said.

“We keep a very close eye on all factors affecting farmers.

“We will continue to monitor the social and economic impact and work with all industry stakeholders to respond to the dry conditions and consider further actions and support as necessary.”

Mr Rockliff said the Government was committed to supporting farming families through the dry conditions.

“I empathise with their frustrations,” he said.

“This season has been extremely challenging.

“Before summer, we announced $2.27 million worth of initiatives to help farmers and the industry to ensure they were best placed to respond to short- and long-term challenges.”

“This included $2.2 million to extend the subsidy for new irrigation electricity connections, $44,000 for a Feed and Fodder Register and an additional $30,000 to extend Rural Alive and Well outreach services on King Island.

“We have also modernised our water management framework by providing additional water for irrigation from our water catchments.”

Mr Rockliff said he was in regular contact with the Federal Agriculture Minister Barnaby Joyce.

The State Opposition wants the Government to establish a taskforce, to provide support for struggling farmers.

Opposition spokeswoman Madeleine Ogilvie did not think enough was being done.

“Let’s see some action, let’s see (the Government) talking to the farmers and accepting that there’s a problem,” she said.

“Unless that dialogue commences immediately, we’re going to run into trouble.

“The more people you can get engaged in working towards a solution, the better.”

Ms Ogilvie hoped the taskforce would look at options for financial subsidies and support.

“I can’t make it rain but we can certainly look at things around people who are struggling with debt repayments or perhaps contracts they’ve entered into for forward selling goods… that they are now unable to produce,” she said.

“Those economic issues are critical to running and sustaining business in the long term.”

But Mr Johnston questioned the suggestion.

“I don’t know what they’re talking about, I haven’t been briefed, I haven’t seen their Primary Industries spokesperson for two years,” he said.

“Wouldn’t it be good if Labor actually came and talked to the TFGA and we’d perhaps know what they were talking about.

“Please come and talk to us and we might be able to find some common ground.”