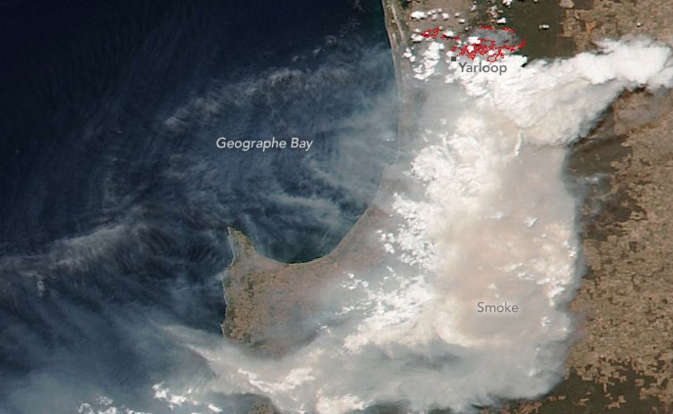 Tasmanian firefighters are bracing for dangerous conditions in the south today.

The weather bureau issued a severe fire danger rating for the south-east and the Derwent Valley and a very high fire danger has been issued for the remaining areas in southern Tasmania.

It coincided with the fire service declaring a total fire ban for the south.

Temperatures are predicted to reach 37 degrees Celsius in Cygnet and New Norfolk today while Hobart is expected to hit 33C.

The stage one restrictions aim to reduce about 20 per cent of non-essential water use and will help to manage the demand for water over summer.

TasWater said the restrictions mainly impact on the watering of gardens and sporting ovals.

Bridport, Flinders Island and Colebrook were among other areas already under restrictions.

The total fire ban makes it an offence to light a fire in the open or use machinery that might cause a spark or flame.

Remember that crazy fire season the US just had? Now Australia’s having one. https://t.co/inIYAmMgSi pic.twitter.com/Uy8Uv3KexN

Agricultural harvesting is not permitted between the hours of 11:00am and 6:00pm.

Significant fines and possible jail sentences apply to a breach of a total fire ban.

SA prepares for the worst

South Australia is bracing itself for dangerous fire conditions as its summer of unprecedented hot weather continues and another day climbs close to 40 degrees Celsius in windy conditions.

Temperatures in Adelaide are expected to peak at 39C, combined with shifting winds nearing 50 kilometres per hour and a chance of thunderstorms.

The Bureau of Meteorology (BoM) said there was a 40 per cent chance of showers in the morning and afternoon.

John Nairn from BoM said wind changes combined with a cool change could result in although wind speeds were not expected to be as strong.

“You may end up with a flank fire that turns into the head of the fire, a broad fire front,” he said.

“That’s not as strong as we saw during the Pinery fire but it doesn’t mean our forecast accuracy is perfect,” Mr Nairn said.

Coober Pedy and Marla in the state’s North-West Pastoral district were forecast to reach 42C, while Naracoorte (40C) in the South-East and Lameroo (42C) in the Murraylands were expected to hit the 40-degree mark.

“During the Pinery fire we saw that change come in and … that flank of the fire becomes the front,” he said.

He said holiday-makers travelling around the state needed to take extra care.

If temperatures rise as forecast, it will be the 18th day this summer that Adelaide has experienced temperatures above 35C.

Forecasters said a typical summer resulted in 16 days above 35C.