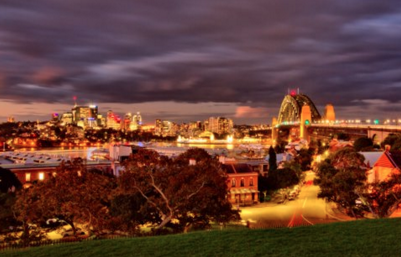 Parts of Sydney have experienced the hottest April day on record, with the weather bureau saying the temperature reached 34.2 degrees Celsius at Observatory Hill about 1:30pm.

Meanwhile at Bourke in the state’s central-west, the mercury hit 38.6C, recording the hottest April day anywhere in New South Wales for 30 years.

The Bureau of Meteorology said the peak was reached in Sydney city at 1:24pm.

“We’ve got a north easterly sea breeze at the moment so we’re not going to go any higher,” duty forecaster Miranda Langton said.

She said Sydney’s warm night, which reached a low of just 21C, set Sydney up for the record day.

“This morning we started off at around 25C at about 8:00am, so it was quite a warm night that probably helped the temperatures soar this afternoon,” she said.

“About 10:00am we had already reached 28C and then we just continued to climb until about 1:30 this afternoon.”

One Bondi beachgoer said he spent most of the “pretty perfect day” outside.

“A lot of people seemed to take the day off work, it was a packed beach all day so I think everyone knew it was the hottest day,” he said.

Two Bondi Beach mums said they “weren’t complaining” about the heat, rather it was a good excuse to get outdoors with their children.

They said it did not seem unseasonably hot since it had been so warm since Christmas in Sydney.

Sydney has experienced its hottest April day on record, with 34.2 degrees recorded at Observatory Hill https://t.co/r9j7Klh5VL

“But it did seem a bit odd knowing it wasn’t summer anymore,” one said.

Ms Langton said the hot day was due to a sharp front.

“So you can tell how sharp this front is just by looking at Melbourne’s temperature, [which] was sitting at 14 degrees a couple of hours ago.”

A cool change is expected to hit Sydney about midnight tonight as a southerly change moves up from the south coast.

The temperature had dropped to about 26C at 6:00pm.

Sydney is expected to return to average April conditions tomorrow with a top of 21C.