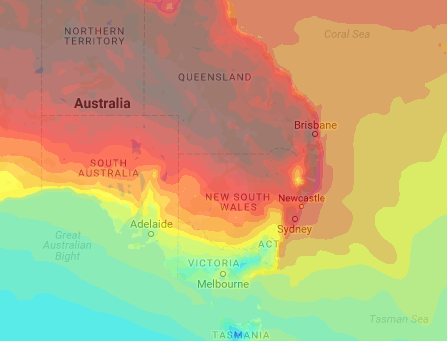 A new September record for New South Wales has been broken and total fire bans remain in place across half of the state as an unseasonal heatwave takes hold.

In NSW, the in what is a new September record for New South Wales.

In Sydney, the temperature is expected to hit 37 degrees Celsius in Richmond and Penrith, while the CBD is forecast to reach 33C.

BoM duty forecaster Mohammed Nabi said strong winds would push the heat from the middle of Australia across NSW.

“The set-up we’ve got is a large high pressure in the Tasman Sea and a cold front approaching from the south-west,” he said.

“That is going to turn all the winds north-westerly over much of New South Wales.

“The winds will be strong enough to push the heat all the way through much of the state.”

Total fire bans are in place for 12 regions and Greg Allan, from the NSW Rural Fire Service, urged people to be prepared.

“It is going to be very hot in most parts of the State and windy as well,” he said.

“We will have firefighters standing by in those areas that have total fire bans.

“But it’s also important to know your risk and know what you’ll do with your family if there is a fire or you’re threatened by a fire.”

A grass fire closed the Hume Highway at Wingello midway between Sydney and Canberra.Ã‚

Ã‚ The Rural Fire Service raised the alert to watch and act.

, with firefighters on standby in the state’s north-west.

Temperatures are forecast to reach the mid-30s with winds gusting up to 90 kilometres per hour in the Mallee.