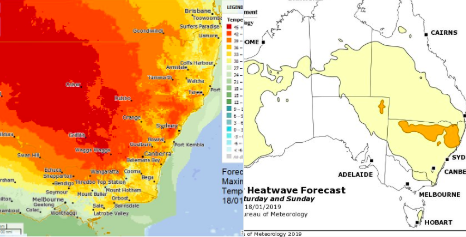 An extreme heatwave already breaking records across Australia is expected to peak in many parts of the country Friday, with temperatures forecast to stay above 40 degrees Celsius (104 F) for the sixth day in a row.

The six days from January 12 to 17 are all within Australia’s ten hottest days on record, the Australian Bureau of Meteorology said.
Marble Bar in northwestern Australia hit the highest temperature during the heatwave at a sweltering 49.1 C (120 F) on Sunday — a January record for the area. The town had seen more than 20 consecutive days of temperatures above 40 C (104 F).
On Wednesday, New South Wales broke 14 heat records and eight January records. Conditions are so hot in the state that asphalt roads are starting to melt, CNN affiliate Nine News reported.
Records across South Australia, New South Wales and Victoria over the past week include 48.9 C (120 F) in Port Augusta, 47.8 C (118 F) in Andamooka and 46.4 C (115 F) in Griffith.
“Based on the extent and duration, this is the most significant heatwave to have affected inland eastern Australia since January 1939,” Simon Grainger, Bureau of Meteorology climatologist, told CNN.
And it’s not just the highs that are making people sweat. Noona in western New South Wales broke an all time “minimum temperature” record Thursday night, with the heat levels remaining above 35.9 C (96 F) throughout the night, according to the Australian Bureau of Meteorology.

While inland areas in New South Wales and Queensland are expected to see the mercury rise once again on Friday, cooler temperatures are expected to bring relief to parts of South Australia according to the BOM.
The town of Tarcoola in South Australia, which reached a sweltering 49 C (120 F) on Tuesday, is forecast to cool off slightly to 31 C (87 F) Friday.
As the protracted heatwave continues, concerns are with the vulnerable, including the young, elderly and those with asthma or respiratory diseases.