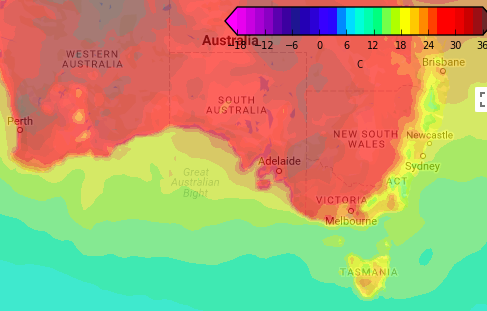 South Australia will experience a prolonged spell of early season heat during the next six days.

Persistent northerly winds driven by a slow moving high pressure system will cause the spell of warm and dry weather.

Temperatures are forecast to reach 8 to 12 degrees above average across the state between now and next Tuesday, with some areas tipped to reach 37 degrees between Saturday and Tuesday.

Adelaide could reach or exceed 30 degrees for the next six days, which would be the city’s longest spell above 30 degrees this early in the season for eight years.

Adelaide’s warmest days will occur between Sunday and Tuesday as the mercury climbs into the mid-thirties.

Fire danger ratings are expected to rise across the state as warm northerly winds start to strengthen from the weekend and early next week, ahead of an approaching trough.

Looking ahead, the trough will sweep over the state during the middle of next week, replacing the hot and dry weather with clouds, showers and possibly severe thunderstorms.

Adelaide’s longest spell of days over 30 degrees on record was 17 during February 2004.