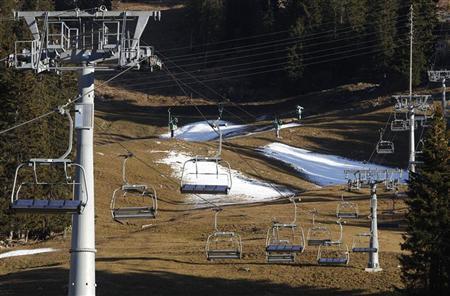 Australia’s ski season began this weekend with grassy slopes after a prolonged warm spell in the nation’s southeast.

A strong cold front at the beginning of May raised hopes of an early start to the season however, dominant high pressure systems since then have brought an extended run of warm weather.

While the weekend will be far from a postcard start to the season, there will be some snow falling with the passage of a weak front.

Saturday started out dry before showers developed in the afternoon and snow above about 1500 metres, then lowered to about 1300 metres in the evening. Cold air ingered on Sunday morning allowing a few more flurries to fall, mainly on the eastern side of the VIC and NSW ranges.

Unfortunately there was only enough precipitation to bring a few centimetres in total over the weekend, before dry conditions return next week under a high pressure system.

This high will bring clear skies and allow night-time temperatures to drop below freezing through most of next week, providing a good opportunity for snow making at the resorts.

Those keeping an eye out for more natural snow will have to wait at least another week. The next snow-bearing front will not reach the Alps until at least next Friday or Saturday.