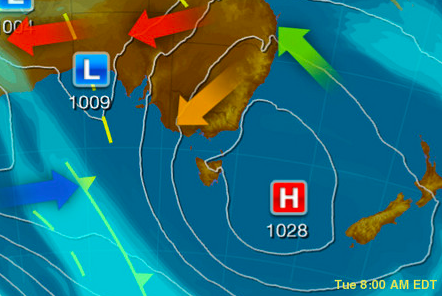 Australia’s eastern seaboard is experiencing a notably cool November this year, while a spell of late-spring heat is challenging records in the nation’s southeast.

Australian weather system are usually transient and typically move from west to east. A low pressure trough sitting over South Australia one day would normally be located over Victoria and NSW the next day.

So, what happens when the weather systems over Australia slow down or get stuck in place?

Stagnant weather patterns cause individual locations around the country to experience a prolonged spell of similar conditions.

Such a sluggish synoptic setup is occurring at the moment and it is causing some unusual feats.

Brisbane is on target to experience its longest run of cooler-than-average days in about four years, possibly reaching 17 days in a row this Thursday. Further south, Sydney’s cool spell may see the city register it first November without any 30 degree days in 10 years.

The Tasman High is sending eastern Australia’s missing late-spring warmth down towards the nation’s southeast, where Tasmania and southern Victoria will experience a heatwave this week.

Saturday was the first time in two years that Hobart (29.8C) was the warmest capital city in Australia other than Darwin.

Hobart’s run of heat will extend into the middle of this week, with the city on track to register six consecutive days on or above 27 degrees by Thursday. This has not happened during any month since 1890 and in November for 136 years. Hobart’s average maximum at this time of year is 19 degrees.

If Melbourne reaches at least 28 degrees until Friday, which it is forecast to do, this will be the city’s first seven-day spell at or above 28 degrees during November on record. The previous record for November was six days in both 2009 and 1896.