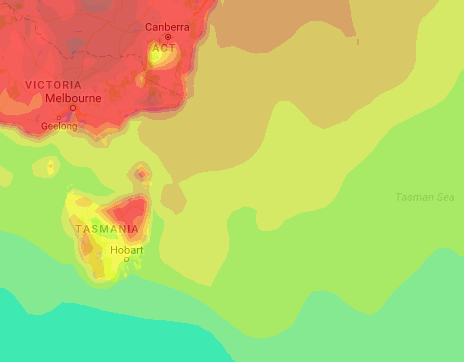 The weather patterns responsible for record-breaking spring heat in Hobart this week have also taken a toll on Tasmania’s rainfall this month.

Most locations in Tasmania have registered less than 40 per cent of their long-term monthly average rainfall during the first 23 days of November.

Some places in the state’s north haven’t even recorded one millimetre of rain so far this month, including Devonport, which usually picks up 58mm during November.

The stubborn high pressure systems that have been positioned over Australia’s southeast and the Tasman Sea for much of this month have blocked the passage of rain-bearing frontal systems, which usually affect Tasmania at this time of year.

Hobart’s 17mm of rain so far this month, as of 9am on Thursday, is less than one third of the cityÃ¢â‚¬â„¢s long term monthly average. By this point in the month last year, Hobart had already collected more than 60mm of rain.

The lack of rainfall has coincided with a record-breaking spell of warm weather in Hobart, which is also a result of the latest stubborn Tasman high.

As of Thursday, Hobart had experienced its first six day spell of November days above 26 degrees on record. Data is available back to the late 1800s. It’s also the first time this has happened in any month since 1990.