Australia: Queensland drought now ‘the largest ever recorded’ – covers 80% of the state 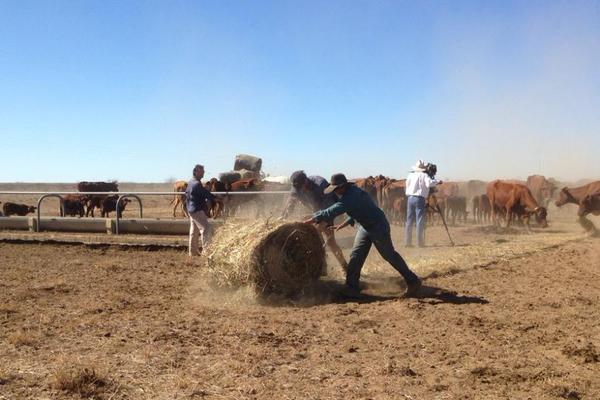 Queensland’s drought has spread to a record 80 per cent of the state, the largest area ever officially recognised as being in drought.

The State Government has added four council areas to the list of drought declared places.

Minister for Agriculture and Fisheries Bill Byrne said the summer wet season had been too patchy to benefit the hardest hit areas.

He said Bureau of Meteorology advice that the tropical Pacific was in the meant prospects for drought-breaking winter rain and spring rains were not good.

“The current funding arrangements will remain in place through to 2018 and will be reviewed as necessary.”

Queensland drought spreads to a record 80 per cent of the state http://t.co/WcKtLrbbQU pic.twitter.com/oYhBh4s7Us

Burke shire Mayor Ernie Camp lobbied hard to have his shire drought declared after its status was revoked in 2014.

“Anything assisting us to help carry stock through until it rains would certainly help the shire, but not only just our shire,” he said.

“Since the Gulf is the calf factory for Queensland we can retain our breeders and make it easier for those who have been in drought for previous years to restock when rain does come.”

Producers in the Gulf shire have been selling off cattle by the thousands in anticipation of a very dry winter.

Closer to the east coast, the parts of Mareeba shire drought declared by the Minister have not been in a similar situation since 1979.

Ronnie Ferguson said he has never seen it so dry at his place, near Chillagoe, about 200 kilometres inland of Cairns.

“We are selling cattle that we shouldn’t be selling,” he said.

“We usually run between 7,000 and 8,000 head here comfortably, and now that this has come along we’re going to have to get rid of a couple hundred thousand of them.

“What we’re selling this year we should be selling next year and the year after so in a couple of years time we’re going to be short of cattle.

“All our neighbours are in the same boat, the further west you go the drier it gets I hear.”

Queensland’s Minister for Agriculture, Bill Byrne said the northern part of Queensland was the focus for new drought declarations.

“This takes the total area of Queensland drought declared to 80.35 per cent, the largest area ever officially recognised as being in drought,” he said.

“The previous record drought declared area was 79.01 per cent in March 2014, which was also in this current drought.”

The Minister said if any producers in revoked areas believed they were still in drought, they could apply for an ‘Individually Droughted Property’ (IDP) declaration.