Australia – QLD town runs out of water – prepares to evacuate 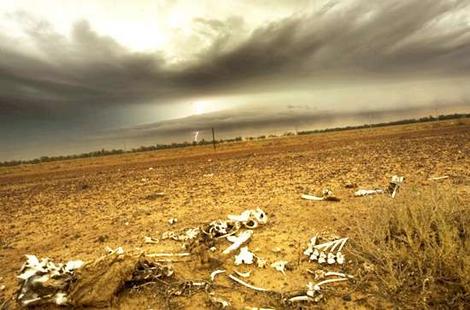 After two years with virtually no rain a Queensland town is planning for the possible evacuation of its entire population as water supplies run out.

The mayor of the inland community of Cloncurry, near Mt Isa, says evacuating its 3000 residents will be a last resort.

But that option is part of an emergency plan now being developed in response to dwindling water supplies.

Mayor Andrew Daniels says residents are now on the toughest water restrictions – with domestic use restricted to the bare essentials of bathing and cooking – as Cloncurry’s two sources of water dry up after two years with no proper rain.

He says the next step will be moving to bore water, which will require people to boil water to drink.

“It (evacuation) is an extreme move. It’s the final straw. But people are really thinking about the dire position we’re in,” he told the ABC on Wednesday.

“It’s a scary thought but I’m hoping and praying that rain comes before we have to get to that.”

Mr Daniels said he’d recently spoken with federal government representatives who were drawing up a White Paper for the development of Australia’s north.

They’d asked for his thoughts on opportunities to build the economy in the north.

“There’s been no vision in the past to try and build another water source, so we don’t get into these sorts of situations.”

In 2008, the town was forced to bring water in by rail from Mt Isa, but that’s not an option this time.

He said local water supply at Lake Moondarra was just above 20 per cent and the weekend rain may have lifted that by three per cent, but that’s nowhere near enough.

“We have to talk about the worst case scenarios,” had told The Courier-Mail.

Mr Daniels said the Cloncurry contributed much to government coffers through mining royalties, and the beef and transport industries and it was time for some that money to start flowing back to the community in the form of better infrastructure.

“Somewhere along the line, someone’s going to have to invest back in this area to make it sustainable and make it grow,” he said.