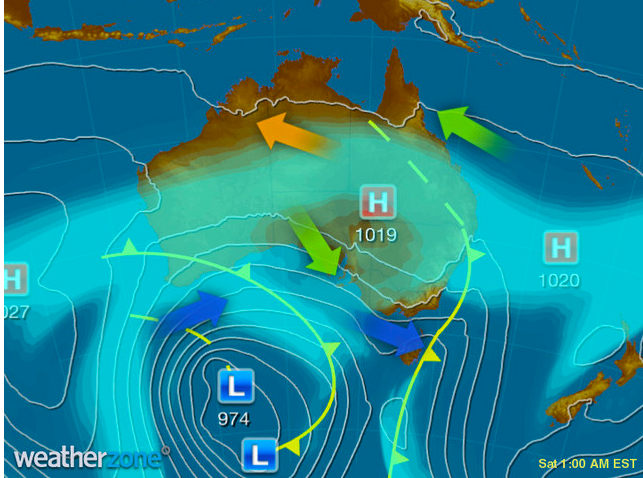 A flurry of cold fronts will sweep across southern Australia during the next week, causing multiple bouts of rain, thunderstorms, damaging winds and snow.

While this type of weather is typical in southern Australia during winter, there has been a lack of rain-bearing system during the first two months of the season.

In South Australia, Cleve’s 29mm of rain during June and July was their lowest for the first two months of winter since 1940, and the second lowest in more than 120 years of records. Victoria’s Rutherglen only collected 67mm of their usual 118mm during the first two months of winter, their lowest total in 16 years for this period. Canberra’s 7.8mm last month was the city’s lowest July total since 1982.

During this spate of dry weather in southern Australia throughout June and July, an index called the Southern Annular Mode (SAM) was in a positive phase for a number of weeks.

The SAM index reflects a north-south displacement of the belt of westerly winds surrounding Antarctica. When the SAM is negative, the westerly wind belt, and the cold fronts embedded within it, shifts further north towards Australia. Conversely, the westerlies and cold fronts typically contract southwards towards Antarctica during a positive phase of the SAM.

After remaining positive through most of July, the SAM index plunged towards the end of the month and reached its lowest level since at least early April. While forecasting the SAM is difficult, models suggest that this negative swing should persist during at least the next week.

With help from the negative SAM, a series of cold fronts is likely to sweep across southern Australia between now and the end of next week. Each system will bring a wintry mix of wind, rain, storms and snow to the nation’s southern states.

According to some computer models, some parts of southern Australia could receive more than 50-100mm of rain during the next eight days. Unfortunately, falls will be much lighter for drought-affected areas of eastern Australia.