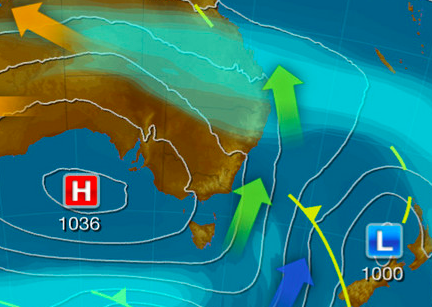 A stagnant weather pattern will lead to a run of dry and mild weather across NSW for at least the next week.

A strong high pressure system centred to the south of Australia will dominate the nation’s weather throughout most of the second half of May.

This stubborn high will maintain relatively cool and dry southerly winds across NSW, allowing little variation in weather conditions from day to day.

Maximum temperatures are forecast to be near to below average across much of NSW during the next week. Minimums will generally be on the cool side too, dipping low enough for frequent frost and fog to form, particularly in elevated parts of the state.

The run of cooler weather may come as a relief after an unusually warm first two months of autumn. NSW as a whole experienced its warmest April and seventh warmest March on record.

While weather patterns like this are not uncommon at this time of year, this high is located a bit further south than usual for May. As a result, it is blocking strong cold fronts from reaching NSW and limiting the seasonal rainfall these systems bring.

No substantial rain is expected in NSW while the high pressure dominates during the next week.

This continues a trend of dry weather in NSW at the start of 2018. The state experiencing it its driest April in 13 years and registered below average rainfall during the first three months of the year.

According to the Bureau of Meteorology, the first quarter of 2018 was the seventh driest January to April period on record for southeastern Australia.

This recent spell of dry weather has caused long-term rainfall deficiencies to increase in parts of central and eastern NSW.