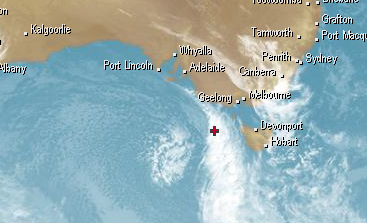 Tasmania is in for another blast of wind, rain and snow this weekend.

A cold front was expected to cross the state on Saturday and drag a pool of air from the Southern Ocean in its wake.

Showers will develop with and behind the front and are likely to fall as snow above and elevation of 900-1000m overnight and into Sunday morning. Small hail is also likely in some areas of the west and south.

On Sunday, showers will become confined mostly to the state’s west and south as a deepening low pressure system off the east coast causes cold and blustery southwesterly winds. Maximum temperatures on Sunday will be close to 10 degrees in southern Tasmania, although areas exposed to the wind will feel a few degrees colder than this.

The cold front and associated low pressure system will also cause snow highland snow, showers and gusty winds in Victoria this weekend.

Wind and showers will ease on later on Sunday and on Monday as the low moves into the Tasman Sea.

Not trying to be rude, but why are you guys putting up forecasts for 1000m snow in Tasmania when last week NZ had snow down to 700m, and you guys didnt even mention it in any of your forecasts.

Sure there was a mention of a cold blast, but no sight of any snow level forecasts.

Because we’re a free service for you with limited resources and we have worked hard over the years to build a partnership and share news with Weatherzone in Australia. Your taxes fund both NIWA and also MetService forecasts and yet we are entirely free – we spend all of our small profits simply surviving against an unfair Government duopoly which limits the services we can provide in our own country.