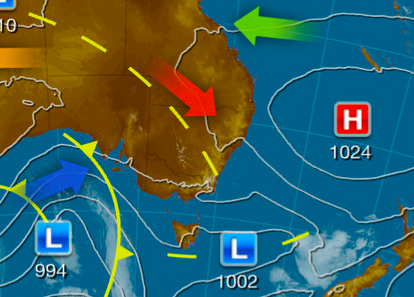 Sydney broke another April heat record on Thursday as temperatures soared across NSW.

An unseasonable pool of heat broke numerous April records as it swept across the country during the last week.

Sydney’s top of 34.6 degrees this afternoon was the city’s second hottest April day on record, falling just short of the 35.4 degrees recorded on Monday.

This is also the first time on record Sydney has registered two days over 34 degrees during April, with data available back to 1859 in the city.

April temperature records were also broken along the South Coast and Illawarra this afternoon. Bega’s 36.5 degrees was its highest April temperature by more than a degrees since the site opened in 1992.

While Sydney was sweating it out like it’s still summer, Adelaide residents were rejoicing in cooler weather. After a record-breaking (for April) four days at or above 34 degrees between Sunday and Wednesday, Adelaide’s temperature spent most of today in the low twenties. Adelaide’s 23C at 1pm today was 13 degrees cooler than the same time on Wednesday.

Temperatures reached a sweltering 38 degrees in western NSW on Thursday afternoon, although this falls short of the 40.5 degrees at Pooncarie on Tuesday, which was a new April record for the state.