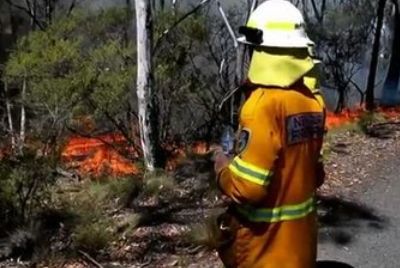 Thousands of firefighters will today continue to hold the line against the fires rampaging to the west and north of Sydney as conditions remain dangerous despite forecasts of falling temperatures and easing winds.

The searing heat of yesterday’s northwesterly winds gusting to 80 km/h and mercury readings reaching the high 30s will fall by about 10C, although winds driving a southerly change will still whip across vast firefronts at up to 60 km/h.

But last night firefighters had prevented fronts from forming into what authorities had feared would become a megafire raging down through the Blue Mountains and threatening the outskirts of Sydney.

Rural Fire Service Commissioner Shane Fitzsimmons said that as the threat receded, residents who had fled to evacuation centres could return to their homes.

“If you have been someone that has chosen to depart the Blue Mountains today and head to Penrith then it would be safe to head back home [last night] because the risk has been averted.”

Earlier Fitzsimmons warned of a “long, tough road ahead”, lasting well beyond the weeks of battle remaining on the past week’s fires.

– NZHerald (for more extensive news on the Australian bushfires, including video, visit www.nzherald.co.nz)