Australia: Long weekend flood threat for some in the east 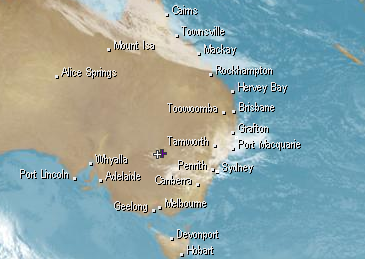 It is going to be a soggy long weekend [Queen’s Birthday] in parts of eastern Australia, with some areas likely to experience flooding.

Onshore winds feeding into a low pressure trough near the nation’s east coast will produce showery conditions for the next few days. An upper trough moving over the eastern states this weekend will help intensify rainfall near the coast, while allowing showers to also affect inland areas of New South Wales and Queensland at times.

The heaviest falls over the long weekend are likely to occur near the coast, although storms may bring localised burst of heavy rain to some inland locations as well.

A severe weather warning was issued Friday for flash flooding in coastal areas of New South Wales north of Nelson Bay. The warning stated that some areas could receive more than 200mm of rain during the next few days.

A flood watch has also been issued for the Orora, Bellinger, Nambucca and Hastings River Valleys, where minor to moderate river flooding is possible from Saturday onwards.

Showers are expected to spread north of the border and affect southeast Queensland from Saturday, and parts of the central and southern inland from Sunday. Rainfall totals in Queensland will be dependent on the position and strength of the surface trough, although heavy falls may develop near the state’s southeast coast.

Refer to the latest severe weather and flood advisories this long weekend for the most up-to-date information on this system.