Australia just had their hottest winter on record – BoM 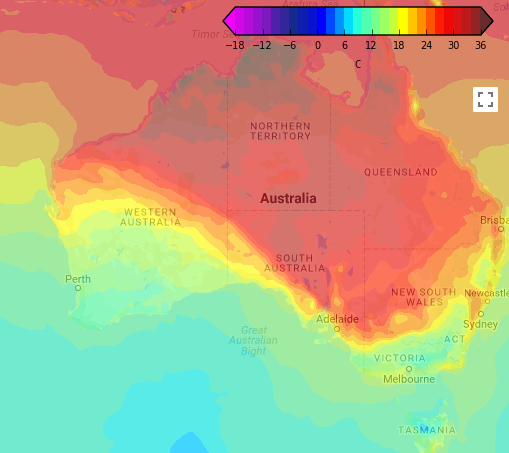 Winter in Australia this year was hot and dry with the average maximum temperature up nearly 2 degrees Celsius above the long-term trend.  The 2017 winter was the hottest since 1910 when national records began, according to the Bureau of Meteorology (BoM).

The average maximum daily temperature recorded across all Australian recording locations for June, July and August 2017 was 23.7C.

The warm weather was most pronounced in the north of Australia.

It was the hottest winter on record for Western Australia, and the Northern Territory, while New South Wales and South Australia made the top three.

Daily minimums were also warmer than average in most of northern Australia but not as far above average as the maximums.

In contrast, inland NSW and northern Victoria had notably cold nights with many areas 1C to 2C below average.

NSW had its coldest average winter nights since 1997.

Meanwhile nationally it was the ninth driest winter on record. The only large area to record rainfalls significantly above average was a pocket of central NT as a result of one rain event in mid-July.

Andrew Watkins, manager of extended and long-range forecasts at the Bureau of Meteorology, said the real reason for the warmth was the persistent high pressure seen particularly during early winter.

“But you also have to add to that the long-term warming trend,” he said.

“The higher than average pressure has kept the skies clear and rain awayâ€ meaning more heating of the inland from the sun and less evaporative cooling from ample water on the ground.”

Evaporative cooling is the same process that cools you down when you sweat, taking energy from the surrounding air to convert liquid water into gaseous water vapour, leaving the surroundings cooler.

Without a lot of water on the ground this year, large scale evaporative cooling could not happen.

The clear skies also explain the low minimum or overnight temperatures in the southern states.

Without a blanket of clouds, the heat from the day is lost to space, and temperatures drop overnight.

But that is not all, Dr Watkins said: “We’ve also seen fewer cold fronts able to penetrate inland due to the slow moving and more southerly highs acting as a barrier to their normal northward progression”.

So not only has high-pressure prevented rain in the north but it has also prevented the cold fronts which normally bring rain in the south during winter.

According to the climate scientists at the Bureau of Meteorology, the story behind the heat in northern Australia is more about what has not been happening.

In a standard winter there would be several south-easterly surges, bringing cold air into the tropics.

This year these surges were almost completely missing Ã¢â‚¬â€ blocked by that high pressure Ã¢â‚¬â€ until very late in the season.

So was the hot weather predicted?

The short answer is yes. The Bureau of Meteorology’s 2017 released in May, showed a high chance of exceeding median maximum temperatures.

“Our reasoning back at the time was that despite neutral ENSO and IOD patterns, the Pacific and Indian oceans were warmer than average, with cooler conditions in the eastern Indian Ocean near WA,” Dr Watkins said.

Warm ocean temperatures are an indication of the energy available to the system, while cool temperatures in the eastern Indian Ocean would prevent the lift required to mix up and break down a growing region of high pressure.

What about the long-term warming trend?

Nineteen of the last 20 winters have now had average maximum daily temperatures above the 1961 to 1990 average.

Andrew King, climate extremes research fellow from the University of Melbourne, uses a range of computer climate models created all over the world to tease out the different factors causing extreme weather events.

According to BoM’s new spring outlook released yesterday, it looks like spring is going to continue to be warmer than average for the north and southeast of the country.

No matter what comes in spring, winter 2017 is one for the record books.

I wonder if Andrew King’s computer models allow for the human caused distortions to the temperature data.