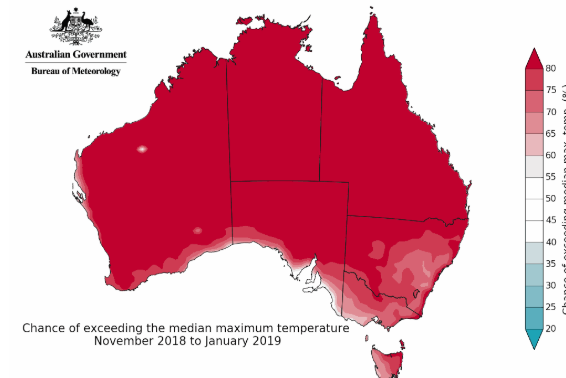 The Bureau of Meteorology’s latest three-month outlook was released on Thursday and the message for most of Australia is clear: the odds favour warm and dry weather between November and January.

This outlook is largely being driven by cooler-than-usual waters off the north coast of Australia and a looming El Nino in the Pacific Ocean. These features are both expected to limit the amount of moisture in the atmosphere over Australia during the coming months, suppressing rainfall.

There are some exceptions to the hot and dry outlook. For example, there are roughly equal chances of above and below average rainfall for parts of NSW and northern Australia during the next three months. Similarly, temperatures could go either way along the nation’s south coast, particularly in terms of overnight minimums.

The prospect of more dry weather is unwelcome news for the large swathes of eastern Australia that are suffering from drought. Despite parts of NSW and Queensland seeing decent rainfall during October, many areas are still running well below average in year-to-date rainfall.

Tamworth’s 242mm of rain between the start of January and 9am today (Friday) is its lowest total to this point in the year since 1994. It’s also their fourth driest year-to-date  on record, with data stretching back to the 1800’s.

In southwest Queensland, Thargomindah has only picked up 40mm so far this year. This is also its fourth lowest year-to-date total in more than a century of records and the lowest since 1965.

While the Bureau’s outlook indicates that dry and warm weather is favoured for much of the country, it doesn’t guarantee it. Other factors, such as warm sea surface temperatures near Australia or strong low pressure systems and fronts, could still cause periods of heavy rain or cooler weather during the months ahead.

Visit http://www.bom.gov.au/climate/outlooks to view the latest seasonal outlooks from the Bureau of Meteorology.