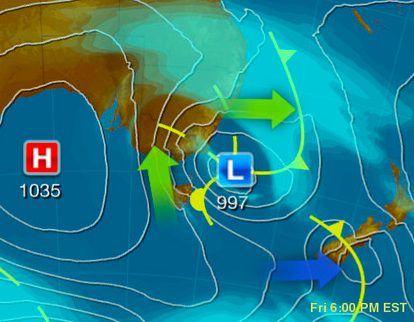 The Insurance Council of Australia has declared a catastrophe for storm damage in southern Tasmania, as the floodwaters recede and the rain heads to the state’s north-east.

The council’s CEO, Rob Whelan, said more than 1,000 claims had already been lodged by Friday afternoon.

“The extent of the damage to property, and vehicles in and around Hobart will take several days to be known, and it’s too early to estimate the insured damage bill,” he said.

He said the declaration is designed to help reduce the emotional and financial stress experienced by households and businesses affected by flooding and storm damage.

A disaster hotline has been set up â€ 1800 734 621 Ã¢â‚¬â€ to assist policyholders if they are uncertain of their insurance details.

Claims will also be triaged to direct urgent assistance to the worst-affected property owners.

RACT Insurance has already received 400 claims and more are expected this weekend.

“As the full extent of the damage is assessed, we have estimated the overall impact from the storm to exceed $1 million,” the company’s CEO, Trent Sayers, said.

About 11,000 homes and businesses around the state remain without power.

The biggest power outages are in Sandy Bay where 5,000 customers are affected by the power outage.

TasNetworks said it hoped to progressively restore power to those areas by late on Friday.

Tasmania’s north-east is now bearing the brunt of strong winds and heavy rains that have caused chaos around southern Tasmania.

“The heavy rain that we saw in Hobart and the south east overnight and this morning, that’s now eased and the focus is on the north-east of the state,” Bureau of Meteorology forecaster Brooke Oakley said.

The complex low-pressure system off the east coast is bringing strong winds to northern parts of the state.

“We have started to see the winds pick up about the coast and inland at Launceston the winds are now up to 50 kilometres per hour with the gusts in the 70s,” Ms Oakley said.

She said there were heavy rains around the St Helens and Fingal areas.

But the north east will not get the same 129mm soaking Hobart did overnight.

The forecast is for more settled weather around the state by tomorrow morning.

That heavy rain is still causing havoc in the south.

The police rescue helicopter was dispatched to the Tynwald Park area in New Norfolk to rescue a boy who was stranded in floodwaters on the cricket oval.

Tasmania Police said the 15-year-old was now safe and well.

The Huon River at Tahune and Judbury has reached minor flood level and there are minor flood warnings out for the Huon Derwent and North Esk Rivers.

The State Emergency Service (SES) has received more than 380 calls for help and has attended to just over 300 of them.

“The magnitude of requests for assistance is probably one of the highest the SES has seen in a long time,” SES acting regional manager Mark Dance said.

He said there were still calls coming and the clean-up would continue through to Saturday afternoon.

“We’ve had very significant damage to a lot of properties Ã¢â‚¬â€ houses flooded, structural damage to even partial house collapses, roof damage a lot of vehicle damage,” he said.

Roads around Hobart affected by floodwaters and debris remain closed and police are repeating pleas to motorists not to drive into floodwaters.

Messy clean-up ahead for locals

As the weather eases, the job of cleaning up will continue for weeks.

The Law School at the University of Tasmania has as particularly messy problem to deal with.

The school’s library has been inundated and hundreds of books have been destroyed.

The dean of the law faculty, Professor Tim McCormack, said he was grateful no-one had been injured and no lives lost.

“We remind ourselves that the beating heart of the Law School is more than the building and its contents but our people,” he said.