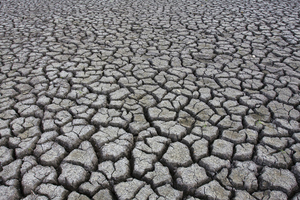 Although last yearâ€™s drought was the worst in New Zealand for 70 years, a drought in central and northern Australia is leaving it in the dust.

A heat wave is the latest blow to befall farmers who have been gripped in an unrelenting drought that has lasted almost two years.

The mercury has risen to over 48 degrees in some parts, dropping birds from the sky, killing thousands of fruit bats, decimating herd numbers and threatening to force some farmers off their land.

In the outback town of Maree, publican Phil Turner fried an egg on a shovel live on ABC radio.

Although there has been scattered rain over the last two days across some areas of Queensland and the heat wave is now easing, weather forecasters see little chance of the drought easing before Autumn.

Some have claimed they will have no option but to abandon their properties if rain doesnâ€™t fall before then. Tens of thousands of cattle have been shot or have starved to death due to little or no access to water and feed.

Agriculture Minister Barnaby Joyce is reported as saying he is concerned that some taking cattle to sale are finding it costs them more to do so than the price they get for them.

Makes one glad to be living in NZ when you read about the dire circumstances Mother Natures dishes up to Australia.

Hopefully the heat will abate soon.