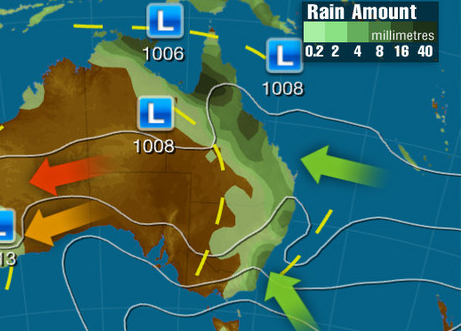 Parts of Australia’s eastern seaboard could receive more than a month’s worth of rain in the next week, raising the risk of flooding during the opening days of autumn.

The highly populated stretch of coastline between southeast Queensland and eastern Victoria will be hampered by days of rainfall from now until the weekend.

Many areas east of the ranges between about Brisbane and Bairnsdale could receive falls of 25-50mm during the next week. Heavier weekly totals of 100-200mm are a good chance along some sections of the NSW coast, which would exceed the entire monthly average for March in some places.

Decent falls of around 20mm should also penetrate into central NSW, although the heaviest rain from this event will fall near the coast. Thunderstorms will also contribute to abrupt downpours at times, increasing the risk of flash flooding.

The deluge will occur as a sequence of features align over eastern Australia during the change of seasons. Onshore winds carrying moisture from the unusually warm Tasman Sea will feed a surface trough sitting near the coast. This system will be enhanced by an upper-level low pressure system that will carry a pool of cold air across the region.

It is worth noting that this setup contains all of the ingredients necessary for the development of east coast lows. These systems occur most frequently during autumn and winter and can cause dangerous weather along the eastern seaboard, including damaging winds, heavy and widespread rain and dangerous surf. At this stage the chance of an east coast low developing during the next week is low, although it cannot be ruled out.

Conditions are expected to ease along the east coast early next week as the trough moves offshore into the Tasman Sea.

Be sure to check the latest Australian warnings throughout the week as this situation unfolds.