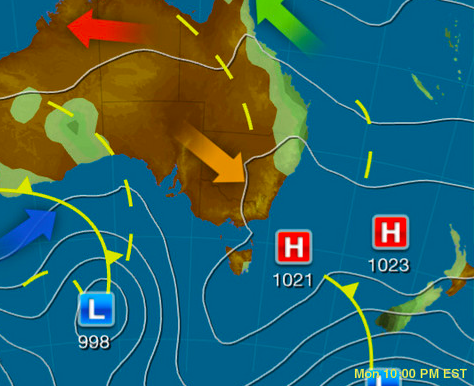 Heavy rain, thunderstorms and damaging winds are all possible in parts of eastern Australia this coming week.

An upper level pool of cold air has been causing showers and thunderstorms over parts of NSW and Queensland during the last two days, some of which have been severe.

Further storms are likely in southern Queensland and northeast NSW this weekend as another upper-level trough moves over the region. While most of this weekend’s storms will be fairly benign, some could become severe.

Looking further ahead, forecast models disagree on what will happen with the upper-level feature as we head into the start of next week. This makes it difficult to predict what type of weather people living in eastern Australia can expect.

At this stage, a low pressure trough is expected to deepen near the east coast early next week, which may cause wind and rain to increase near the coasts of southeast Queensland and northeast NSW.

Some models suggest that a low pressure system could form within this trough, possibly as an east coast low. However, it’s still too early to tell whether or not an east coast low will develop, and where the worst impacts would be should such a system form.

East coast lows are capable of causing very intense weather along Australia’s east coast, with impacts sometimes equivalent to that of a low end tropical cyclone.

People living in southeast Queensland and northeast NSW should prepare for wind and rain to pick up at the start of next week.