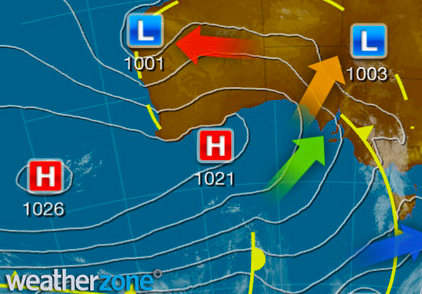 A burst of summer heat starting tomorrow in Perth may cause the city to have its warmest run of days this early in six years.

A slow-moving high pressure system to the south of Australia will cause an extended period of warm east to north easterly winds in Perth between now and early next week.

The city has a chance of reaching or exceeding 34 degrees between Friday and next Monday, which would be Perth’s warmest four-day spell this early in the season since 2011.

Perth is currently forecast to reach 34 degrees or more for five consecutive days from Friday, which would be its warmest five-day spell this early in the season since 1972. However, most computer models indicate that a cool change will prevent next Tuesday from getting this warm.

Perth’s warmest day during the next week is likely to be Sunday, with the mercury expected to reach the high thirties. If the city reaches 37 degrees, it will be the warmest day in nine months.