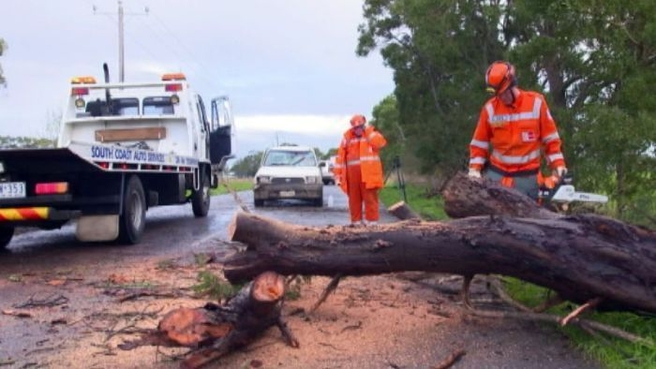 Police are investigating the deaths of three men killed during wild weather in Victoria’s south-west on Friday night.

Two men were trying to move a tree that had fallen across Woolsthorpe-Haywood Road at Broadwater, north-west of Warrnambool, about 9:00pm (AEST) when they were hit by a car and killed.

A man in the front passenger seat of the car was also killed.

The driver was taken to hospital with minor injuries, while four children in the car escaped injury.

“We’ll certainly be offering them peer support through our critical incident stress management systems to make sure that we look after those emergency crews that attended that because they were known by some of the crews that attended,” he said.

“It’s really important that we now look after those crews.”

Mr Barton says it seems the men hit by the car were trying to help others out when they were killed.

“That’s sort of typical of country people that if something happens like that, a tree gets across the road or a branch falls down, the typical country person will stop and try and get that off the road and clear it so that it makes it safe for everyone else,” he said.

“Unfortunately, with the tragedy last night, they should have perhaps in hindsight called the SES or CFA [Country Fire Authority] to help remove the tree.”

Winds gusts of more than 100 kilometres per hour were recorded in elevated areas.

The SES received only 12 calls for help in the Melbourne area, unlike Tuesday, when there were 3,000 calls for assistance.

The inclement weather is expected to continue, with the SES doorknocking low-lying areas in Warrnambool, Portland and Port Campbell to prepare residents for flooding at high tide.

“We still do have the severe weather warning out for damaging winds … that’s mostly going to be about elevated areas in the east,” he said.

“We do have a low-pressure system developing just west of Tasmania.

“We’re likely to see the potential for damaging winds this time from the west-south-west developing around the south-west coast … extending inland through southern and mountain districts.”