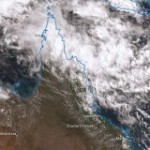 Far North Queensland is facing the prospect of its second tropical cyclone in less than a month, after days of rain that have already broken records for December.

The Bureau of Meteorology (BOM) said it had been the wettest December on record for Ingham and Cardwell, with both towns receiving more than 1,000 millimetres of rain.

Cairns had received more than 640mm of rain this month, making it the wettest December in the region since 1975.

With rivers and creeks across the far north still heavily swollen, police and State Emergency Service volunteers have been searching for a 34-year-old woman missing in floodwaters north of Cairns.

After a fruitless day of searching on Friday, authorities began again early on Saturday morning.

The woman from Rossville was last seen entering fast-flowing waters near the Homerule Causeway on River Road around 6:00pm on Thursday, when she tried to cross the river to return to her home.

Rain eased on Friday, but rain and thunderstorms are forecast for the Peninsula and north-east tropical coast on Saturday as a monsoon trough develops over Cape York.

He said there was a high risk of flooding when more rain arrived.

“The catchments are saturated, the rivers will respond fairly quickly to heavy rainfall and come up quite quickly.

“We have seen practically major flood levels on the Daintree river in the last few days, that’s now dropped to a minor level now but it could very quickly come up again once this trough develops and this low develops.”

Mr Banks said it was possible the monsoon trough could intensify into a cyclone by next week.

“Further from that, we expect the low to then move to the east into the north-west Coral Sea and intensify on Monday and Tuesday,” he said.

“So by Monday there is a moderate chance of that low becoming a tropical cyclone.

“All the modelling is suggesting that once it does form it will continue to move east into the Coral Sea away from the mainland.

“But it still gives us a couple of days of fairly heavy weather over the Peninsula and seeing some of that heavy weather return to the coastline anywhere north of about Cardwell.”

A flood watch remains in place for all catchments north of Cardwell.

“Generally people are really pleased because we’ve had an unprecedented dry season in the last few months, more than what many locals have ever seen,” she said.

“Council itself had to go to level 3 water restrictions which of course we’ve now eased.”

But she warned people in the region to prepare for more rain and flooding.

“So now there is a break in the weather and we’re encouraging everyone to resupply, do what you need to, get prepared, particularly those areas that know they will be isolated.

“Whilst council crews have been doing a fantastic job in cleaning up debris, removing trees, it is still very muddy and people need to drive slow.”