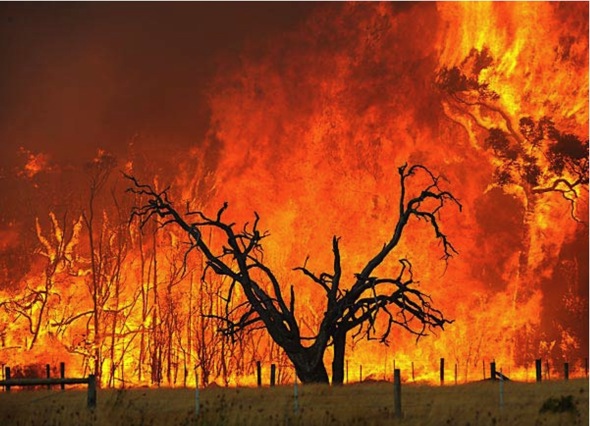 Hot, dry and gusty northwesterly winds across New South Wales are causing dangerous fire conditions and potential record October heat.A low pressure trough crossing the state is dragging down intense heat sourced from the interior which has been building under clear skies. Across the state’s lowlands, including the coast, the mercury will soar into the mid to high 30’s, while parts of the northwest will climb into the low 40’s. Even the state’s ranges will reach into the high 20’s or low 30’s.Several places including Sydney, Parramatta, Port Macquarie and Gosford are expected to get close to or break their all-time October records. Camden could see its hottest October day since 1988, while Richmond and Mount Boyce should see their hottest October day in around two decades.For many places, this will be the hottest it has been this early in spring on record.This system has already brought extreme heat to other states. This included 43 degrees at Eucla in Western Australia on Tuesday, a record for this early in spring. Ceduna in South Australia reached 42 degrees yesterday, its hottest October day in almost two decades.A tight gradient between very hot temperatures ahead of the trough and much cooler conditions behind it are generating strong and gusty winds across the state.Wind gusts are expected to peak at 90-100km/h in central and southern parts of the state, reaching up to 130km/h in the Snowy Mountains. Gusts have already reached 90km/h at Cooma and Bombala and 106km/h at Thredbo. A southerly buster will also sweep up the coast late in the day, causing wind gusts of a similar strength about the exposed coast.Unfortunately the combination of hot, dry and windy conditions will also create dangerous fire conditions. A total fire ban is in place for a large area of the state, with severe to extreme fire danger ratings expected. This is continuing the trend of the active start to the bushfire season.It will be much cooler in the wake of the system on Friday, however heat will build again over the weekend. While is not likely to be as hot as today, it could be potentially windier, not aiding the cause to fight any fires that do develop today.