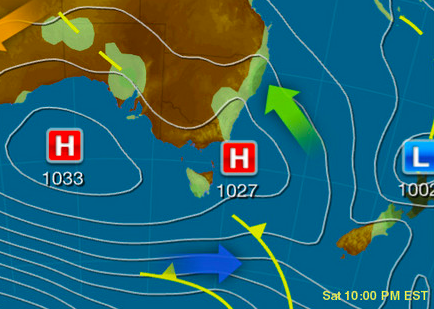 It appears autumn has finally arrived in Sydney after the city experienced a few showers and its second coolest day of the year.

After a record warm and dry start to April, southerly winds brought long-awaited autumnal weather to the city on Friday.

Friday afternoon’s top of 21.7 degrees was Sydney’s second coolest day since December and one degree below average for this time of year.

Despite the mild weather, Sydney is still having its warmest April on record in terms of both minimum and maximum temperatures after a prolonged spell of unseasonable heat earlier in the month.

Sydney’s Observatory Hill rain gauge had registered zero millimetres between the start of April and 9am on ANZAC Day, which had never happened before in the city’s 160 year history.

As of 9am Friday, Sydney’s 1.6mm of rain during the month to date makes this its second driest April on record, behind 1.4mm in 1868.

The final three days of April are forecast to reach 21 degrees in Sydney, although this won’t prevent it from being the city’s warmest April on record.