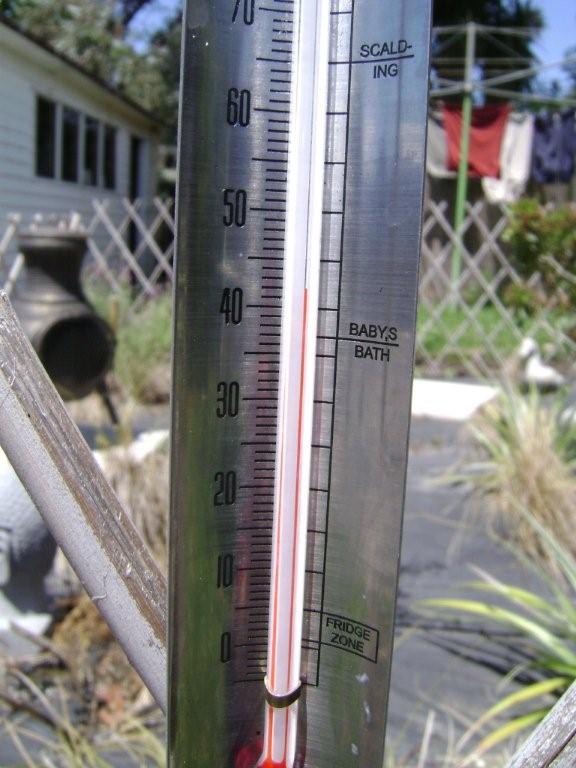 It pains many of us but over the decades we’ve become used to seeing Australia sneak in at the last minute and steal something from us…whether it’s rugby, cricket or even NZ born celebrities.  But many kiwis will be out-raged to learn today that Australia has stolen one more thing from us – our summer.

Across New Zealand summer has raced out the door faster than George Bush from an English class with two of our largest cities on just 14 degrees this hour.  Both Christchurch and Wellington have a strong, cold, southerly with the temperature hovering on just 14 for much of the day.

Dunedin and Invercargill aren’t much better on 15 degrees while Lower Hutt has just 13.

But across the ditch eastern Australia is sweltering with parts of Sydney now hitting 40 degrees.  Downtown Sydney has 39.   Inland parts of New South Wales are at 41 with the hottest part of the day still at least two to four hours away.  I think some parts will hit 45.

In New Zealand the hottest region is Bay of Plenty with both Tauranga and Whakatane on a hot 26 degrees, while Auckland has only 20 and a fairy fresh sou’westerly…certainly not hot enough to want to take a swim.

Beautiful day in Tauranga today; felt quite humid. Spent most of the day surfing, no need for the wetsuit, the water was refreshing!

Don’t forget the North here, 21 up here in Whangarei, cloudy with cool SW but little rain, we have enjoyed a great early summer which has faded like the rest of NZ but we did have it good for a couple of months.

Also those temps in NSW at near 40 deg or more, not nice that, way too hot and creates it’s own problems. Would be hard to bear inland there I reckon while the lucky coastal residents may enjoy the beaches and a nice sea breeze the majority of folk live in the hot suburbs and suffering the tremendous heat. Think I prefer what we have even though not very summery.

Not much better on 15?? That temp isn’t that bad when there’s no cold wind blowing…. Anyways, the cloud has broken up and it’s now 18 at the airport and 21 in the city.

Thats why i plan to spend 17 days in Sydney in two week time, But i hope to see at lest one good thunder storm there of course.