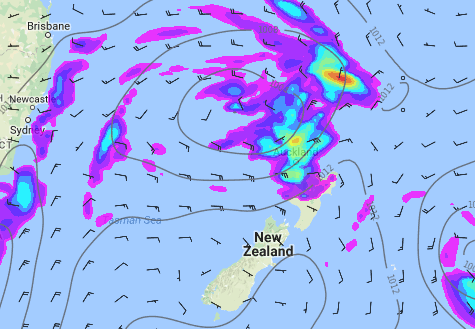 Updated Wednesday PM — As WeatherWatch.co.nz forecast last Friday yet another low is headed to New Zealand this coming weekend – and while it’s following the pattern of previous rain bands it’s unlikely to bring another weekend of localised slips and floods to the same parts of the North Island hit last weekend.

Last weekend narrow but intense areas of rain brought localised slips and flooding to parts of the Wellington, Kapiti and Taranaki regions especially. This was due to narrow rain bands moving slowly in a long line from west to east – rather than one front sweeping over the island in one motion.

This weekend the low that is carrying more rain from out of SE Australia towards northern New Zealand is much weaker and more high pressure over the South Island will push back harder than last weekend, ensuring Wellington, Kapiti and even most likely Taranaki will miss out on most, if not all, rain.

High pressure will be so strong over the South Island and lower North Island this weekend it should help guide this low to more northern areas, placing Northland as the region most likely to get heavy downpours (Sunday). But even Auckland and Coromandel Peninsula a little further south look to be on the border of this heavier rain band – with the centre of the low possibly tracking just north of Cape Reinga on Sunday evening. Definitely one to watch though – and we have more news here for northerners.

Next Wednesday and Thursday another burst of isolated but heavy downpours are possible as energy from Australia’s south eastern corner comes to New Zealand’s western coastline – but again, it’s surrounded by a lot of high pressure too.

It looks as though September’s weather pattern around New Zealand has been heavily shaped by Australia’s new dramatic wet tropical change.