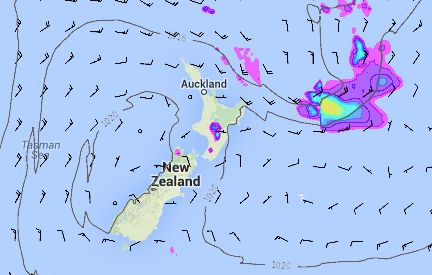 The current situation is becoming clearer for Auckland and most data sets / model information is now going for a dry Saturday about Auckland city. And in fact it is looking to be a really nice sunny day with light winds and afternoon sea breezes, there still may be some cloud to the north of the city i.e. north of Orewa. Later in the evening / overnight there is the low risk of a shower for the north also but otherwise conditions have improved dramatically.

The low pressure system that could have potentially brought rain is now forecast to sit further offshore to the northeast and that is where most of the wet weather is looking to stay.  (Updated 2:30pm Friday)

Most of us know weather forecasting is not an exact science – so rather than admit uncertainty after an event has passed we’re today doing it in advance – saying Saturday’s forecast, for Auckland especially, is a bit tricky to lock down.

The main area of difficulty is forecasting rain this Saturday around Auckland.

Some computer models suggest a day of rain – certainly other forecasters are going with that.

Our forecast for much of the week has said the city should be fairly cloudy with the chance of a shower – rain is more likely north of the city.

However our latest data today is backing away even further from rain.  One data update we received this morning for Auckland suggested just a 10% chance of rain for Saturday – down from a 70% chance the day before.

At this stage the satellite map looks mostly clear for the north – but sometimes these east to south east wind flows can bring in small pockets of sub-tropical rain which lingers.  The low to our north is falling apart – it’s in that 50/50 zone of hardly being a low which is why some of the forecasts are wildly different from website to website.

We maintain our prediction made last month – that November would see a new dry trend kicking in for many areas.

We’ll be updating more than usual over the next 24 hours as we monitor this tricky 50/50 forecast for rain in Auckland and other northern regions.

But like we say, the latest forecast that WeatherWatch.co.nz has suggests that Saturday may be drier and sunnier than some forecasters are currently predicting.

Any chance that wind might flick to the SW on Auckland’s East coast on Sunday?

Hi there – yes it’s certainly possible.  Our forecast on Sunday says east to south east winds but in reality this low is dying and the winds may well ease on Sunday and turn into sea breezes around Auckland .  Normally that would encourage an easterly for eastern areas but the winds are expected to tilt SW on Sunday so, yes it’s possible.  But we aren’t expecting much wind on Sunday at this stage.

Thanks for that Phil, much appreciated.

Keep up the good work 🙂