Atlantic: Powerful Hurricane Irma could be next weather disaster 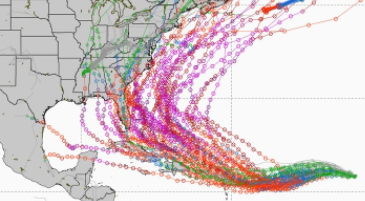 While much attention remains on Texas and the destruction left by Hurricane Harvey and its historic rainfall, powerful Hurricane Irma is rapidly intensifying in the open Atlantic and poses a major threat to the Caribbean and potentially to the United States next week.

With the storm still five days away from the outermost Caribbean islands and at least a week away from any potential US impacts, there is still a lot of uncertainty about where it will go.
The range of possibilities presented by the forecast models more than a week out literally spreads from Mexico to Canada — and everywhere in between.

Irma was designated a tropical storm Wednesday morning, and by Thursday afternoon, it had strengthened into a large Category 3 hurricane, with winds of 185 km/h.
Such explosive strengthening is known as “rapid intensification,” defined by the National Hurricane Center as having its wind speed increase at least 30 knots (55km/h) in 24 hours.
“Irma has become an impressive hurricane,” the National Hurricane Center said Thursday, noting the rapid intensification. “This is a remarkable 50 knot (100km/h) increase from yesterday at this time.”
Hurricane Harvey underwent rapid intensification just before it made landfall late last Friday, strengthening quickly from a tropical storm into a Category 4 hurricane when it moved onshore near Corpus Christi, Texas.
Irma is a classic “Cape Verde hurricane,” a type of hurricane that forms in the far eastern Atlantic, near the Cape Verde Islands (now known as the Cabo Verde Islands), then tracks all the way across the Atlantic. Cape Verde storms frequently become some of the largest and most intense hurricanes. Examples are Hurricane Hugo, Hurricane Floyd, and Hurricane Ivan.

Hurricane Irma is forecast to continue to strengthen as it moves westward over the next five days, and the official forecast from the National Hurricane Center puts a dangerous Category 4 Hurricane Irma on the doorstep of the Caribbean by the end of the five-day forecast on Tuesday afternoon.

– By CNN Meteorologist and friend of WeatherWatch Brandon Miller.