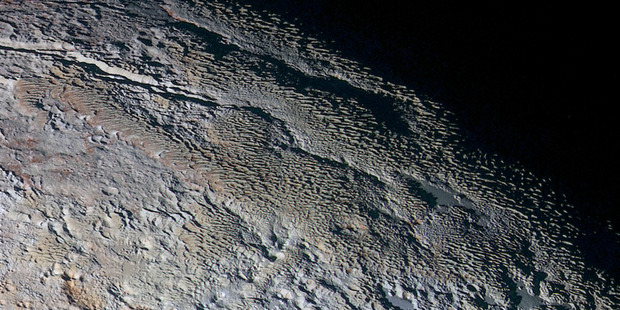 When the New Horizons spacecraft made its flyby of Pluto on July 14, 2015 there was worldwide celebration about the first detailed look at this completely new type of planet in the outer reaches of our solar system.

Since then, the New Horizons spacecraft has transmitted spectacular images back that reveal surprises. Here’s a summary of just a few scientific results to date.

What’s on Pluto’s surface?Perhaps one of the biggest surprises was that Pluto has a surface that is incredibly diverse. Some surface areas, such as those heavily cratered from asteroid impacts, seem to date back to just after Pluto formed, about 4.5 billion years ago.

Enormous ice volcanoes (cryovolcanoes) are driven by warm underground liquids, such as, perhaps, water and ammonia, instead of liquid rock-magma that we have on Earth, and their rough, crusty surface is made of stuff that has erupted from deep within Pluto’s interior.

Other areas show no evidence of asteroid impacts at all, suggesting continual surface activity, such as convection of ices from underground.

What’s Pluto made of?

The high-resolution images from the New Horizons cameras show diverse ice reservoirs across Pluto’s surface. By studying the reflected spectra from the surface, we’ve identified several types of ices: in particular, nitrogen, methane and carbon monoxide.

A darker veneer on top of the ices is probably tholin material – organic compounds processed by solar radiation. These are produced slowly in Pluto’s atmosphere and gently rain down, even now, on to the surface.

A huge darker region, Cthulhu Regio, has a meters-thick layer of this organic tholin material that has built up over billions of years. Frozen water is one of the strongest solids at the low temperatures we see on Pluto. We believe the ice mountains several kilometres above the surface are made of water ice – the biggest ice cubes in the solar system.

Pluto’s largest moon Charon has an extended equatorial region of smooth plains that may also be due to material that erupted from Charon’s interior via ice volcanoes that then flowed over its surface about four billion years ago.

We suspect that was when Charon’s subsurface water ocean froze, causing global fractures as the moon expanded in size (water expands when it freezes).

Charon has dark poles that may be related to volatile gases that escaped from Pluto’s atmosphere only to be captured by the moon’s cold poles.

How does Pluto’s atmosphere work?

The spacecraft’s Alice instrument made observations of sunlight passing through Pluto’s atmosphere. Absorption features indicate an atmosphere made up of nitrogen (like Earth’s) with methane, acetylene and ethylene as minor constituents.

Pluto’s small size and low gravity cause it to hold on to its atmosphere more weakly than larger planets like the Earth (which has 16 times stronger gravity than Pluto). The atmosphere does not extend nearly as far into space as expected and the escape rate of atmospheric gases is extremely slow.

But why the atmosphere is so cold is still a mystery. The brilliant, light blue, globally extensive haze can be seen because large numbers of small atmospheric particles scatter sunlight.

This haze extends hundreds of kilometres into space, and embedded within it are over 20 very thin, but far brighter, layers. The thin layers may be produced by some type of atmospheric wave that causes localised regions of condensation of some as-yet-unknown gas.

The largest moon of Saturn, Titan, shows similar layering of haze in its upper atmosphere.

Where did Pluto’s moons come from?

The origin of Pluto’s five moons has been a long-standing question. But the flyby observations have given some critical data. It’s believed an impact between Pluto and another large Kuiper Belt object early in their history ejected an enormous amount of debris into orbit around Pluto. As time went on, this orbital debris coalesced into Charon.

Previous speculation was that the four smaller moons are actually asteroids captured by Pluto’s gravity. But the New Horizons observations showed these four moons have an unusually high reflectivity and led to a compelling argument that the smaller moons are made of debris from the same impact that formed Charon.

How does Pluto interact with its environment?

As the New Horizons spacecraft approached Pluto, there was some concern that a small amount of debris might remain in orbit around the dwarf planet.

But the student-built Dust Counter, which measures small micrometer size dust particles in space, detected only a single particle much too small to cause spacecraft damage. New Horizons also carried instruments to study what happens to the solar wind when it encounters Pluto’s atmosphere.