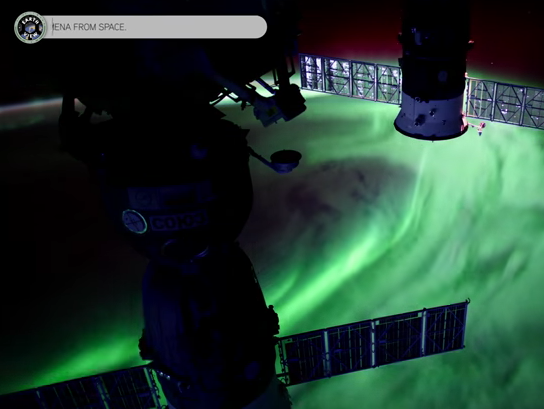 The stunning natural spectacle of Aurora Borealis and Aurora Australis have been captured from above in new footage released by NASA.

NASA Television has released the ultra-high-definition video to give a new glimpse of the green glow that fascinates the world.

The video was compiled using timelapse shots from arguably the best seat in the world for an aurora event Ã¢?? the International Space Station (ISS).

“Auroras happen when electrons and protons collide with neutral atoms in the upper atmosphere,” the NASA video stated.

The video provided the viewer with an insight into the views from the ISS, as the waves of green light wash over the Earth.

The five-minute video looked at both the Aurora Borealis and Aurora Australis, or southern lights, which light up the Antarctic skies in the southern hemisphere.

But the views are not only seen from space, with the average eye and camera perfectly fine to capture Mother Nature at her best.

NASA will ask the world “what do you love about your planet?” when it hosts a celebration of Earth Day on Friday.

“Born in part out of the Apollo-era pictures that first showed the full sphere of our blue planet, Earth Day remains important at NASA,” the space agency said on its website.

“But in a way, every day at NASA is an Earth Day. NASA’s satellites, aircraft, instruments and field missions deliver vital information about our environment, weather and changing climate every 24 hours, seven days a week, 365 days a year.”

NASA will share images on social media to portray a typical day in the life of the organisation’s Earth science mission. It has encouraged social media users to share their photos of how they are celebrating Earth Day by using the hashtag #24Seven.