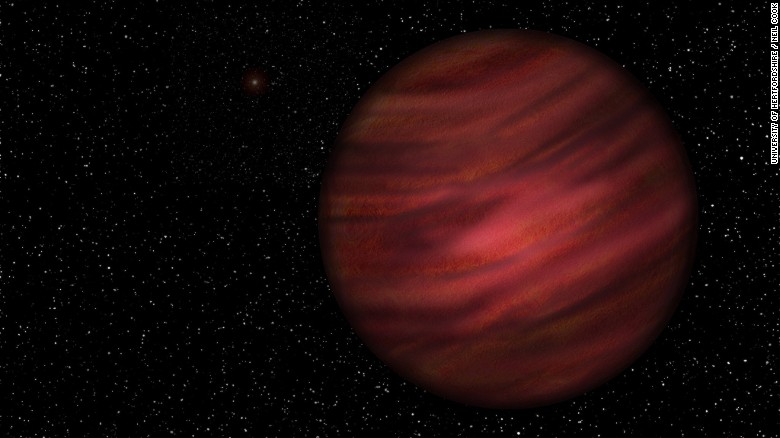 A planet thought to have been free floating in space is actually in a colossal orbit around a star 1 trillion kilometers away.

That’s according to a team of astronomers in the UK, U.S. and Australia, who revealed this week that snappily-named planet 2MASS J2126 is in an orbit around its star 7,000-times the size of Earth’s orbit around the sun.

Their findings were published in the “Monthly Notices of the Royal Astronomical Society.”

“This is the widest planet system found so far and both the members of it have been known for eight years, but nobody had made the link between the objects before,” said lead author Dr Niall Deacon of the University of Hertfordshire in a statement about the findings.

“The planet is not quite as lonely as we first thought, but it’s certainly in a very long distance relationship.”

Previously it had been thought that 2MASS J2126 was a free-floating or “rogue” planet, adrift in the depths of space untethered to any star.

However, observations of the star and planet revealed that the two were moving through space together and appeared to be associated.

“How such a wide planetary system forms and survives remains an open question,” Simon Murphy of Australian National University said in a statement.

At 1 trillion kilometers from its parent star, 2MASS J2126 has the widest orbit of any planet found, one that takes nearly 900,000 years to complete.

Similarities to our own solar system?

While 2MASS J2126 and its star are both 104 light years away from us, we may have our own incredibly distant cousin orbiting right at the edge of the solar system, according to findings published this month.

Researchers at the California Institute of Technology have found evidence in the outer solar system of an object that could be a ninth planet to replace the downgraded Pluto.

Dubbed Planet Nine, it “has a mass about 10 times that of Earth and orbits about 20 times farther from the sun” than Neptune. That means “it would take this new planet between 10,000 and 20,000 years to make just one full orbit around the sun,” according to Caltech.

Observations of the planet have not been made, instead scientists deduced its existence via the orbits of objects in the Kuiper Belt — the field of icy objects and debris beyond Neptune — that all point in the same direction, indicating they are being pulled by some object.

Mathematical modeling and computer simulation led them to the conclusion that a planet was exerting the gravity necessary to shape these orbits.

“There have only been two true planets discovered since ancient times, and this would be a third. It’s a pretty substantial chunk of our solar system that’s still out there to be found, which is pretty exciting,” researcher Mike Brown said.