Astronomy: All 5 ‘bright’ planets visible in the night sky (+PHOTOS) 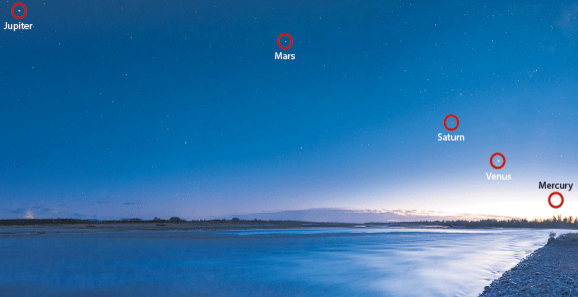 For the first time in more than 10 years it is possible to see all five “bright” planets together in the sky.

Mercury, Venus, Mars, Jupiter and Saturn have aligned and can be seen above New Zealand until about mid-February.

Dr Grant Christie, an astronomer at the Stardome Observatory in Auckland, said it was a rare opportunity.

“If you’re up at [about 5am] and you look due north, you’ll see high in the sky a very bright object, by far the brightest object there, that’s Jupiter.”

To the right of Jupiter is Spica – the brightest star in the constellation Virgo – followed by the distinctive red planet, Mars. After that is Saturn and lower down, towards the east, is the extremely bright Venus.

The alignment has not been seen since January, 2005. “Mercury is a bit more difficult to see because it’s always close to the sun and it only rises just before dawn.”

It should be possible to see Mercury with the naked eye next week, but those with a telescope or even a pair of binoculars will be able to make out other characteristics, including Jupiter’s bands, clouds and its four large moons, discovered by Galileo in the 17th century.

If you fail to catch the alignment this month, it will be happen again in August although winter may make it more difficult to see.

After that, the five planets will not be seen together again until October 2018.