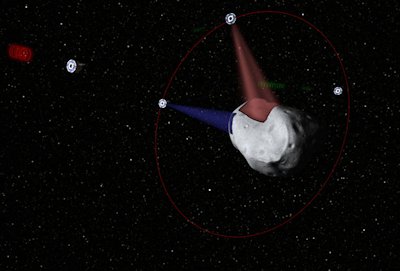 If you’ve ever wanted to be an asteroid miner, here’s your chance.

The billionaire-backed company Planetary Resources, Inc., which aims to extract water and precious metals from near-Earth asteroids, is looking for a few good engineers. The firm actually formed in 2010 but just revealed itself and its ambitious goals today (April 24) — and it hopes some talented job-seekers took notice.

“One of the reasons that we chose to announce the company at this time is because we’re beginning to aggressively search for the world’s best engineers, to complement our team,” Planetary Resources co-founder and co-chairman Peter Diamandis said during the press conference. “And it’s tough to do that in the quiet.”

To be clear, Planetary Resources is looking for engineers to help design and build a fleet of asteroid-mining robots, not a motley crew led by Bruce Willis to combat a space rock “Armageddon”-style. But new hires will have a hand in turning asteroid mining, a concept once only the stuff of science fiction, into a reality, officials said.

Planetary Resources is no fly-by-night operation. Its co-founders, Diamandis and Eric Anderson, are pioneers of the private spaceflight industry, and it counts among its investors Google execs Larry Page and Eric Schmidt, who are worth $16.7 billion and $6.2 billion, respectively.

Planetary Resources officials said the platinum-group metals it plans to extract will help lower the cost of many products here on Earth, including hand-held electronic devices and monitors for televisions and computers.

And asteroid water could help open up the solar system to exploration, they added.

Water can be broken into its constituent hydrogen and oxygen, the chief components of rocket fuel. So the company’s efforts could lead to the establishment of in-space “gas stations” that allow many spacecraft to refuel cheaply and efficiently.

Planetary Resources plans to do its asteroid mining on the cheap, using swarms of low-cost robotic spacecraft to identify resource-rich space rocks and extract material in deep space. It hopes to have identified some suitable targets within the decade, though actual mining activities will come later.

The company currently employs about two dozen engineers, and Diamandis said it hopes to stay small so it can continue to move quickly and keep costs down. But Planetary Resources does have a few openings right now.

While Planetary Resources’ grand unveiling came today, speculation about its intentions has been swirling for about a week or so, ever since the company released a media alert that divulged a few tantalizing details.

The company will likely have many resumes to sift through, for the media attention has already driven many interested folks to contact Planetary Resources, officials said.

“In the last few days, since news of our company has gotten out, we have been absolutely overwhelmed by the thousands of messages, and the volunteers who want to help change the way space is explored,” said Planetary Resources president and chief engineer Chris Lewicki.

“So, in the near future, we’ve got your information,” he added. “We’ll be in touch. We’ll be reaching out. And in this year, and in the years to come, we’ll be working together as a planet to make this happen.”

What about concentrating on ” conflict resolvers” in our existing world today. Surely we should put all our energies into this first instead of ” pie in the sky”/ “get rich” schemes for the greedy few!

Oh no just robots, and I was looking forward to doning a suit and having diner with the Jetsons.
Oh well.

We just need to speculate on some carbon rich planet made out of diamonds which will never be reachable or shares in a gold/heavy metals planetry system discovered 1000’s of light years away,it will make someone wealthy on this planet.