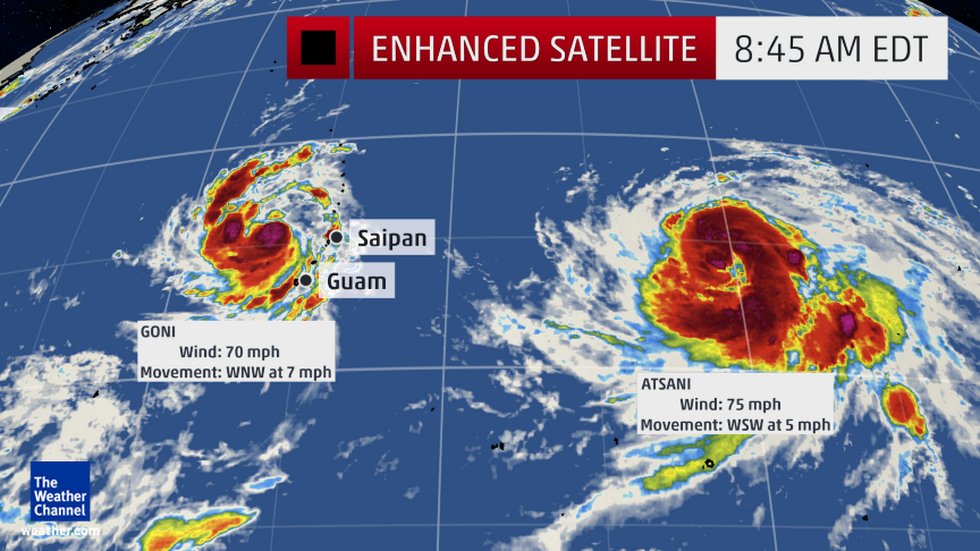 Tropical Storm Goni has brought strong winds and heavy rain to both Saipan and Guam, and is likely to become a typhoon soon as it moves away from those islands. Meanwhile, Atsani has strengthened into a typhoon and is churning several hundred miles to the east of Goni, as of early Sunday morning U.S. EDT.

With low wind shear, a moist atmosphere and ample ocean heat content, both Atsani and Goni are expected to become strong typhoons in the coming days. It’s possible we could have two typhoons equivalent in strength to a major hurricane (Category 3 or stronger on the Saffir-Simpson Hurricane Wind Scale) at some point this week.

The most immediate concern has been Tropical Storm Goni, which has affected Guam and the Northern Mariana Islands.

On Guam, Andersen Air Force Base clocked a 49-mph sustained wind at just before 5 a.m. local time Sunday (3 p.m. EDT Saturday), with gusts to 58 mph, as a heavy rain band lashed the northern end of Guam. Guam’s capital, Hagatna, has gusted as high as 46 mph as of this writing.

According to the National Weather Service in Guam, the center of Tropical Storm Goni was located 130 miles northwest of Rota, 135 miles west of Saipan, and 145 miles north-northwest of Guam, as of 8 p.m. local time Sunday.

The Joint Typhoon Warning Center says maximum sustained winds are currently 70 mph. The Japan Meteorological Agency, whose figures are usually more conservative than those of JTWC, has raised Goni’s maximum winds to 60 knots, or 69 mph.

This is the second tropical cyclone to affect Saipan in the last two weeks. The island is still struggling to recover from Typhoon Soudelor.

The Pacific News Center reported about 4,000 households in Saipan, or over 25 percent, have requested assistance from the Federal Emergency Management Agency.

Power outages and a lack of running water and food have plagued the 44-square-mile island about 135 miles northeast of Guam since an intensifying Soudelor hit the island square on Aug. 2.

Guam’s main newspaper, the Pacific Daily News, says some families on Guam are also recovering from typhoon damage â€“ in their case, damage from Typhoon Dolphin back in May. Dolphin’s eyewall passed over Guam, delivering gusts as high as 106 mph to the northern end of the island.

Heavy rain arrived Saturday and continued Sunday, prompting flash flood warnings for Guam and Rota. Bands of locally heavy rain may continue into Monday for Guam and the Northern Marianas, though it appears the worst of it is now over with.

Two Threats to Asia Ahead?

As Goni continues to move away from the Marianas, rapid intensification is possible, with the system possibly attaining super typhoon status (sustained winds at least 150 mph [240km/h]) at some point this week, though recent forecasts have tempered that outlook a bit.

Steered by high pressure aloft just south of mainland Japan, Goni may eventually pose a threat as a strong typhoon anywhere from the northern Philippines to Taiwan or Japan’s Ryukyu Islands, including Okinawa, late in the new week ahead.

Parts of eastern China and the Korean Peninsula may be threatened early the following week.

But that’s just the first system. What about its twin to the east, Typhoon Atsani?

While it’s much too far out in time to be certain, current indications suggest the eastern system, instead of following in the wake of the first system, may instead track more toward the northwest this coming week.

This may occur thanks to a weakening upper-level high to its north, shifting instead to its east.

This would be well northeast of Saipan and Guam, if it holds true.

However, Atsani may eventually pose a threat to mainland Japan late next weekend or early in the following week, if the jet stream doesn’t curve it into the open waters of the north Pacific Ocean in time.