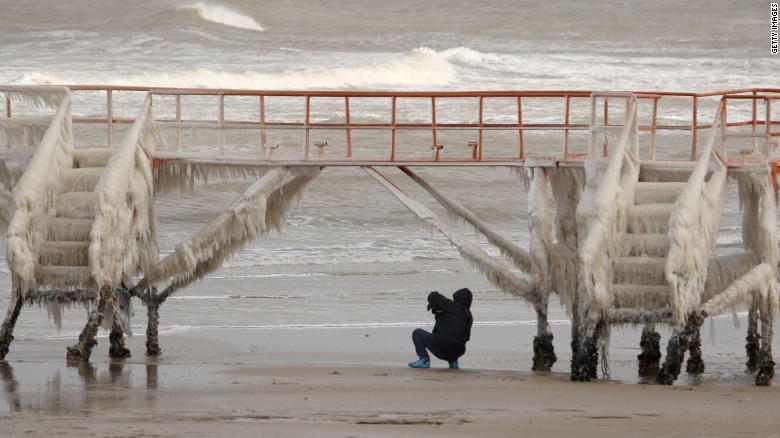 Record low temperatures have wreaked havoc in several Asia countries, with 85 people reported dead in Taiwan and tens of thousands stranded at airports because of the unprecedented cold snap.

In South Korea, at least 90,300 saw their flights canceled over the weekend due to bad weather and more than 10,000 travelers faced severe delays at Kunming airport in southwestern China.

China renewed an orange alert, its second most serious weather warning, with major highways blocked by snow and sleet just as peak travel season for the Lunar New Year vacation kicks off.

An estimated 90,300 people were stranded on the southern island of Jeju, according to the Ministry of Land, Infrastructure and Transport, and around 1,400 people are staying in the airport at the moment, authorities said.

Since Saturday about 1,200 flights were canceled although the airport resumed operations as of Monday noon local time.

Its capital Seoul was hit Sunday by the coldest winter in 15 years, with the lowest temperature recorded at minus 18 degrees Celsius (minus 0.4 degrees Fahrenheit), according to the country’s Meteorological Administration’s website.

That’s the lowest since January 2001 when the mercury fell to minus 18.6 degrees Celsius (minus 1.48 degrees Fahrenheit), the website’s historical data showed.

In the middle and lower reaches of the Yangtze River, the lowest temperatures could reach minus 12 degrees Celsius (10.4 degrees Fahrenheit) from Sunday to Monday, the National Meteorological Center said.

Zhejiang, Fujian and Guangdong provinces are forecasted to approach or even drop below the lowest levels on record while parts of central and eastern China were 6 to 8 degrees Celsius (11 to 15 degrees Fahrenheit) lower than the average historical level.

The worst cold snap in years coincided with the beginning of a 40-day travel rush for Chinese New Year which falls on February 8 this year. Snow and sleet have closed parts of the highway in the southwestern province of Yunnan.

It has also affected air travel with authorities struggling to divert at least 11,229 passengers who have been stranded at Kunming airport since Saturday, Xinhua said.

The typically subtropical Hong Kong experienced its coldest weather in nearly three decades, leading to the shut down of all kindergartens and primary schools on Monday.

On Sunday, the average minimum temperature dropped to 3.3 degrees Celsius (38 degrees Fahrenheit) over the city, where there is no central heating in most buildings.

Frost tourists hoping to see snow ventured up to the city’s highest peak Tai Mo Shan, where temperatures fell as low as minus 6 degrees Celsius (21.2 degrees Fahrenheit), local media reported. Photos and videos on social media showed sleet on the ground as people slipping and sliding along icy mountain roads.

Firefighters had to help over a hundred trapped people at the peaks, 64 of which were sent to the hospital with many exhibiting signs of hypothermia.

“Temperatures on high ground remain below zero degree with icing and frost,” the Hong Kong Observatory warned on Monday morning, adding that the “intense cold surge will continue to affect southern China in the next couple of days.

As of Sunday evening, local, at least 85 people have died in Taiwan due to hypothermia or cardiovascular diseases caused by the sudden drop in temperature, state media reports, citing local fire and emergency services officials.

Thirty-five of the deaths were reported in Taoyuan — northern Taiwan, according to CNA.

Sixteen people – all aged between 65 and 93 – from the southern city of Kaohsiung were declared dead on arrival at a local hospital.

Japan’s Meteorological Agency confirmed that Nago city on the tropical island of Okinawa saw snow for the first time in recorded history since 1966, while the island of Amami Ohshima had its first snowfall in 115 years.

Many other cities throughout western and northern Japan experiencing historic snow falls, including in Nagasaki city which was blanketed in 17 cm (about 7 inches) despite snow being a rarity there.

At least three people died on Sunday. In Niigata city, a 63-year-old man was washed away while trying to shovel off snow blocking a river. His wife was also discovered dead after trying to rescue him. Another 80-year-old man was run over by a snow shovel car.

Over 60 flights were canceled due to heavy snow, according to transport authorities.